At Lilleshall With Louis Smith

For those not familiar with it, Lilleshall is the National Sports Centre and is home to British Gymnastics, Archery GB and the English Institute of Sport. It’s a huge place in Shropshire band, aided by the usual sat nav vagaries, it took Jon and I about 2 ½ hours to get there from north London. Only to find out that, despite the presence of any number of elite carb hungry athletes, you couldn’t get any food after 2 pm.

We were there as guests of British Gymnastics who are looking to promote the sport of gymnastics and were met by Tim Peake and a cameraman. They introduced us to Louis Smith – star and poster boy of British men’s gymnastics. And quite a star he is with both world and Olympic medals. The latter being won in Beijing where he was the first British male to win a gymnastics medal since 1908. He also had biceps bigger than my thighs and, truth be told, I’m not sure that his chest muscles weren’t also bigger. 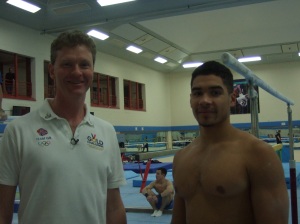 In short, the contrast between the world’s worst gymnast – me (please check out my forward roll video if you don’t believe me) – and Louis couldn’t have been bigger. Despite this he took an hour out of his schedule to warm me up, and to show me the tricks of the trade on the trampoline and parallel bars. He also gave us a demo and a fascinating interview where he talks about his feelings in advance of the London Olympics and the sacrifices he and his team make for major championships.

Definitely worth watching the video – I really hope it inspires you to try the wonderful sport of gymnastics.  The British Gymnastics site http://www.british-gymnastics.org/ has all the necessary details.

A huge thanks to British Gymnastics and Louis Smith for an extraordinary day!

If you would like to sponsor my ultimate Gold Challenge, which I am throwing myself into for NSPCC, Cancer Research UK, Oxfam, Right To Play and Scope, then please visit my fundraising page. Every amount counts and will make a difference to these fantastic charities.

I'm running 10 km in every country in the world - a total of 205 countries - by the 2020 Olympics in Tokyo. I'm doing the Run the World challenge to promote the benefits of sport and physical activity and to raise money for cancer research following the death of my mother from cancer. If you'd like to donate to Cancer Research - https://www.justgiving.com/Dan-Thompson11/ - then I know they'd be very grateful.
View all posts by Run the World →
This entry was posted in Dan's Gold Challenge Story and tagged British Gymnastics, cancer research uk, charity challenge, dan thompson, fundraise, gold challenge, gymnastics, london 2012, Louis Smith, nspcc, olympic, Olympic Games, olympic sports, olympic venue, olympics, oxfam, raise money for charity, right to play, scope, team gb, the olympic games. Bookmark the permalink.