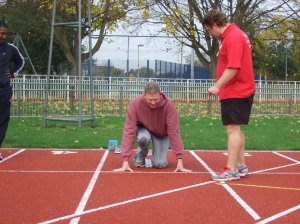 Jon, Liz and I headed off to Mile End Stadium for our 4x100m and 4 x 400m relays. As ever we were coached by the excellent Richard Houlihan and Craig Lacy.

After the usual extensive warm up we began to practice the handover. This isn’t as easy as it looks – especially if done at any speed and I began to have a tiny (but no more) bit of sympathy for the 4 x 100m teams who drop the baton at the Olympics. Its not just the technique involved in physically passing the baton over. Its also crucial to get the timing right. If the receiver starts off too early then the baton won’t be handed over in the handoff space. Start off too late and the baton gets handed over at walking pace. Communication between runners is vital and we needed a lot for practice.

Eventually we progressed to the real thing – the 4x100m. Craig, Liz and Jon ran their hearts out and, coming into the final handover, we were well on course to beat our target of twice the world record time. Unfortunately Jon and I didn’t get our timing right and I got too far ahead…

Everyone had to restart and give it another go. This time we did get the baton round correctly and recorded a time of 1m 10sec – a scant 4 sec inside our target of 1m14.08sec. 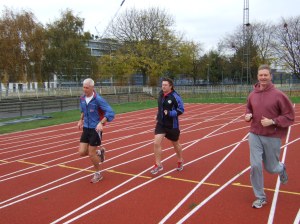 By now we had done so many practice handovers at speed that we were pretty tired. However, we still had the dreaded 4 x 400m to do and a tough target of less than 6 minutes to beat. Luckily we were joined this stage by the legend that is Mick Barlow and, with him running a fast leg, we achieved the time of 5 minutes dead. And dead was pretty much how Jon, Liz and I felt.

However, despite the battering our quads and hamstrings took from the numerous accelerations, we all had a fantastic time. Relays are my new favourite track event!

Please remember to sponsor me –  and please take a look at these  five fantastic charities that I’m raising money for:  NSPCC, Cancer Research UK, Oxfam, Right To Play and Scope

I'm running 10 km in every country in the world - a total of 205 countries - by the 2020 Olympics in Tokyo. I'm doing the Run the World challenge to promote the benefits of sport and physical activity and to raise money for cancer research following the death of my mother from cancer. If you'd like to donate to Cancer Research - https://www.justgiving.com/Dan-Thompson11/ - then I know they'd be very grateful.
View all posts by Run the World →
This entry was posted in Dan's Gold Challenge Story and tagged 100m, Athletics, cancer research uk, charity challenge, dan thompson, fundraise, gold challenge, london 2012, nspcc, Olympic Games, olympic sports, oxfam, raise money for charity, relay race, right to play, scope, the olympic games. Bookmark the permalink.