Regular readers of this blog will know that most of my travel is an exercise in logistics designed to minimise cost and time away from the family. Tourism doesn’t come into it.

But Egypt is going to be different. My run is going to take in one of the seven wonders of the ancient world – the Pyramids in Giza. And as my taxi plays the real life racing video game that is driving in Cairo, I can feel my excitement growing. We pass by endless residential blocks, cross the river Nile and catch a first glimpse of the pyramids – all at breakneck speed.

I check in at the hotel, grab an early breakfast and head for some much needed sleep. And I’ve made a mistake. A bad one.

The original plan was to arrive Monday evening and run early Tuesday morning. But Air Maroc change my flight times – twice – with the result that I leave Marrakech at 7pm, spend three hours at Casablanca airport and get an overnight flight to Cairo landing at 6 am local time.

I buy an Egyptian visa, change money, fill in a health check form (presumably an anti-Ebola procedure), queue and hand that in, fill in a customs form, queue and fill that in, wait for my luggage, and then fight the good fight with the various taxi options. By the time I get to my hotel, it’s almost 8 am and I’ve had about an hour’s sleep.

I do have the presence of mind to check the opening times for the Pyramids and learn that they close at 5 pm – ruling out an evening run. It vaguely crosses my mind that I should do my run there and then but I’m too physically and mentally exhausted. And that was my mistake.

By the time I resurface, it’s hot. Very, very hot. I go online to check the current temperature in Cairo and its 100 Fahrenheit. I’ve run in plenty of hot places but never in 100 F. Given how much I’ve suffered previously in the heat, I am, if I’m honest, a little scared about the prospect of running for an hour in 100 F.

I rest, I drink water, I do email, I procrastinate. I repeat the above. Anything to pass time in the hope that it’ll cool down. But eventually I have to get going. I poke my head outside – has it cooled down a little? Nope, it’s still Thompson frying hot.

But I’ve got to get there before they stop selling tickets. Which I do – just. And what a fantastic place it is. The 3 pyramids – Khufu ; Khafre ; Menkaura – and the Sphinx. All in one large area known as the Giza Necropolis. Truly magnificent. And not such a bad place to run as it turns out as it’s on a plateau and there’s a faint breeze.

Less pleasant is the amount of hassle. This starts on the way up to the ticket office with various people trying to drag you off to buy tickets. Continues as soon as you enter the complex as three men aggressively ask for your ticket (don’t give it to them.) And never really stops with various people shouting at you and trying to sell you camel and horse rides. (With more on offer from the young boys…)

And it’s not as if there isn’t the resource to deal with it. There are plenty of uniformed officials on site. But apart from trying to get you to leave well before closing time, they don’t seem to do anything (though perhaps I shouldn’t have ignored the baksheesh suggestions).

None of this is too bad when you’re running because no-one is going to run with you for long in that heat. But I read comment online to the effect that you should go with an organised group to shield you from the hassle and I suspect that’s good advice.

I’m manoeuvred out the gate nearest the Sphinx and complete my run back to the hotel. It’s hotter back in the city but it’s a dry heat and not as difficult to deal with as the combined heat and humidity in the Caribbean.

The heat and the hassle were oppressive but, overall, a never to be forgotten run! 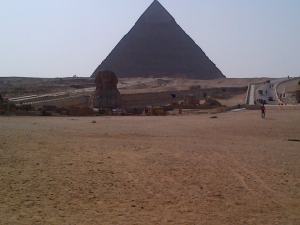