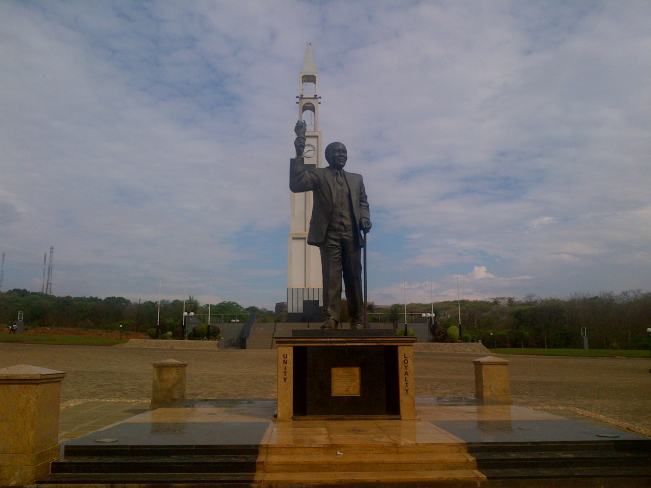 The international airport in Malawi is a fair distance from the capital Lilongwe. About 30km in fact.

I was discussing this with Peter, who was driving, when I turned to him and said, quick as a flash, “It’s a long way to Lilongwe!”

Peter almost wet himself. Tears streamed down his face. “I bet your girls think you make the best Dad jokes around!” he guffawed.

A slightly stricter interpretation of events would have Peter turning to me with a tight, but still friendly, smile and saying “Lilongwe is the name given to the city by the white man because (you guessed it) they thought it was a long way from everywhere.” (Wikipedia attributes the name to the fact that Lilongwe sits on the banks of the river Lilongwe)

Malawi, a landlocked country in south-eastern Africa, gained its independence from Britain in 1964. Hastings Banda was its first President and Peter, with evident pride, took a detour to show me his monument (picture above).

However, the monument was too far out of town to include in my run so I asked my B & B reception for advice. “Don’t go that way ; or that way. And don’t go to the market.” “Really?” “Yes, really. It’s not safe”. Basically I was advised to stick to a small local circuit. Which was a shame as looking round new places is fascinating – and helps the kilometres go by.

At 4 pm – just about exactly 72 hours after my first run of the trip – I started my second run of the day (after Kenya in the morning) and my fifth in 3 days. I thought it was going to be hellish (physically) but it wasn’t quite as bad as expected. Mind you, I was going slowly.

Who cares you might well say. Well, no-one, of course. Apart from me that is.

I tried to put in a fast kilometre to catch up lost time. One sub 5 minute kilometre should do it. But my legs just wouldn’t respond. I simply couldn’t accelerate in the normal way so I had to resort to clawing back the seconds kilometre by kilometre.

And just sneaked in under the hour in 58’ 54”. To what purpose? None whatsoever – except that I was more worn out than if I’d stuck to my original pace. But pride is a funny thing…bit like that joke about Lilongwe…