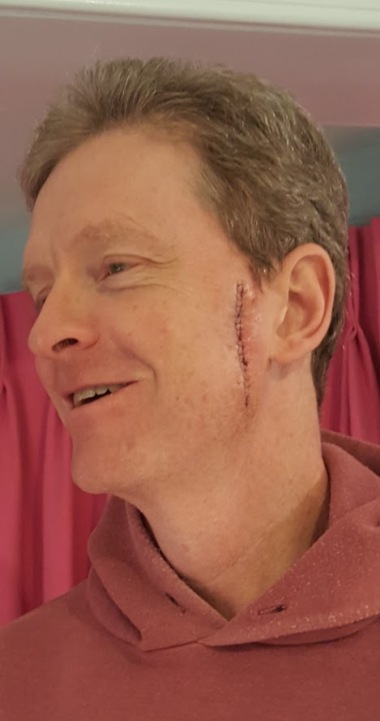 I had so many kind messages after my blog about being diagnosed with skin cancer, that I should probably start with a quick health update. The melanoma has been removed and the ‘margins were clear’- which I understand is good news. The piratical scar above is actually the result of the precautionary follow up op to remove a  further 1 cm of cheek around the site of the melanoma. Assuming they don’t find anything funny in the newly excavated flesh, then I should be in the clear.

Thank you Ben Esdaile and everyone at the Whittington hospital – you’ve been great. The NHS at its best.

And the rest of you, especially the pale freckly ones, if you don’t want to end up looking like that, then PROTECT YOURSELF FROM THE SUN!

And back to the blog which, this week, comes from Majuro in the Marshall Islands.

It had been a 12 hour plus journey to get there from Guam. Partly due to 9 hours of island hopping via Chuuk (Truk), Pohnpei, Kosrae and Kwajalein. Partly due to the usual nonsense of checking-in two hours in advance of an international flight. And partly because of the ‘not obvious why we don’t get moving’ transfer once I’d landed.

By that stage I was exhausted after endless travel, and virtually no sleep, in the previous 48 hours. I was looking forward to my hotel which billed itself as a “locally owned and operated property in a Pacific island paradise.” Turned out that “a Pacific Fawlty Towers” would have had a better chance of complying with the Trade Descriptions Act. Wifi cost $10 for 100 minutes and didn’t work in your room ; the tap water wasn’t ‘recommendable’ for drinking ; a 2 course dinner order crashed the system ; and there was a large cockroach sauntering across the dining room floor. (I know cockroaches usually scurry but this one seemed to have adapted to the local pace of life.)

Not that any of it really mattered as I crashed out straight after dinner. And then, body clock in pieces, woke 3 hours later at 2am (2pm UK time) and couldn’t get back to sleep. By 6 am I’d solved all the world’s problems so I got up and readied myself to run.

There’s really only one thoroughfare on Majuro – Lagoon Road. In order to complete my 10km, I therefore devised the cunning plan of running down it for 5 km – and then turning round and running back to the hotel.

First stop on the run was the Bikini Atoll Town hall (pic below). Bikini Atoll is 850 km northwest of Majuro and its where the US tested a lot of nuclear weapons – 23 between 1946 and 1958 to be precise. Including the 1954 Bravo Bomb which was 1000 times as powerful as the bombs dropped on Hiroshima and Nagasaki. It vaporised 3 islands.

The atoll was evacuated pre testing and is still uninhabitable (though tourist diving apparently now takes place there). The Town Hall on Majuro is the centre for the efforts to win additional compensation from the US on behalf of those who lived on Bikini Atoll.

As I continued my run, the sun started to rise so I went ocean side – the atoll can’t have been more than c 100m wide at this point – and took what I hoped would be a glorious Pacific sunrise picture (below). 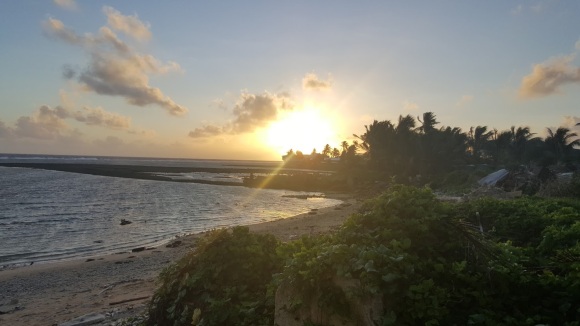 I then looked down and realised that the shoreline was effectively a giant rubbish tip (picture below). I don’t know how much of the rubbish is generated locally, and how much comes from the sea, but either way it was a little shocking. And that’s not the only threat from the ocean. If sea levels rise as projected then Majuro – highest elevation 3 metres – will literally disappear from the face of the earth. 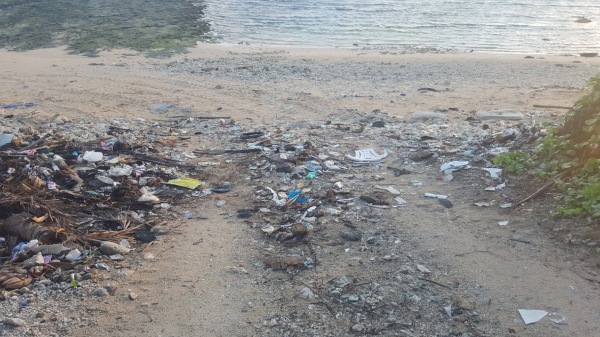 Slightly further up the road I came to one of the few side streets – which I took for a change of scenery. Immediately the standard of housing dropped dramatically and the road smelt of urine. Normally I make a point of running in areas that remind me of the reality of the living conditions faced by so many people around the world. However, in this case there were masses of dogs  on the street and, having been attacked by Alsatians in the past, I’m wary of them. I turned back to the main road and made it to the 5km mark at a little cove on the lagoon side.

Time for a photo of the beautiful lagoon I thought. Except that the lagoon was full of commercial boats at anchor and the odd wreck – like the one in the picture below that was about 10m offshore.

The run back to the hotel was a relatively non-eventful grind through the remaining 5 km.  And I never really did find the tropical paradise I’d been expecting.

I’m conscious that this blog sound negative – and I hate being negative about the places I visit. So let me end by saying that Majuro looked stunning from the air (picture below) as I flew off later that morning.

PS I felt so guilty about writing a negative blog – based on less than 24 hours in Majuro – that I Googled to see what other people had to say about the place. There’s not a huge amount on the web but I think it’s a fair summary to say that, while there are obviously some lovely off shore spots, general opinion about Majuro seems to be in line with my experience.  This from wikitravel perhaps sums it up:

“Unfortunately, Majuro has become polluted, both on land and in the water. Other than the island of Laura, off Majuro, there is little to see with regards to a typical tropical island setting. One can visit the Telecommunications Authority building for an interesting insight into telecommunications in such a small civilization. You can also visit the College of the Marshall Islands to make an appointment with an academic who can tell you more about an area/field. It is essential to travel off Majuro and to visit a neighbouring island or separate atoll, such as Arno. These neighbouring atolls are by far less polluted and offer the true tropical paradise setting.”

The Marshall Islands, officially the Republic of the Marshall Islands, is located near the equator in the Pacific Ocean, slightly west of the International Date Line. The country’s population of 53,158 people (2011 Census) is spread out over 29 coral atolls comprising 1,156 individual islands and islets.

Micronesian colonists gradually settled the Marshall Islands during the 2nd millennium BC, with inter-island navigation made possible using traditional stick charts. Islands in the archipelago were first explored by Europeans in the 1520s. The islands derive their name from British explorer John Marshall, who visited in 1788. The islands were historically known by the inhabitants as “jolet jen Anij” (Gifts from God).

The European powers recognized Spanish sovereignty over the islands in 1874. Later, Spain sold the islands to the German Empire in 1884, and they became part of German New Guinea in 1885. In World War I the Empire of Japan occupied the Marshall Islands, which in 1919 the League of Nations combined with other former German territories to form the South Pacific Mandate. In World War II, the United States conquered the islands in the Gilbert and Marshall Islands campaign. Along with other Pacific Islands, the Marshall Islands were then consolidated into the Trust Territory of the Pacific Islands governed by the US. Self-government was achieved in 1979, and full sovereignty in 1986, under a Compact of Free Association with the United States. Marshall Islands has been a United Nations member state since 1991.

Politically, the Marshall Islands is a presidential republic in free association with the United States, with the US providing defense, subsidies, and access to U.S. based agencies such as the FCC and the USPS. With few natural resources, the islands’ wealth is based on a service economy, as well as some fishing and agriculture; aid from the United States represents a large percentage of the islands’ gross domestic product. The country uses the United States dollar as its currency.

The majority of the citizens of the Marshall Islands are of Marshallese descent, though there are small numbers of immigrants from the United States, China, Philippines, and other Pacific islands. The two official languages are Marshallese, which is a member of the Malayo-Polynesian languages, and English. Almost the entire population of the islands practises some religion, with three-quarters of the country either following the United Church of Christ – Congregational in the Marshall Islands (UCCCMI) or the Assemblies of God.

Majuro is the capital and largest city of the Republic of the Marshall Islands. It is also a large coral atoll of 64 islands in the Pacific Ocean The atoll has a land area of 9.7 square kilometres (3.7 sq mi) and encloses a lagoon of 295 square kilometres (114 sq mi). As with other atolls in the Marshall Islands, Majuro consists of narrow land masses.

The main population center, named Delap-Uliga-Djarrit, DUD – three contiguous motus, had 20,301 people as of 2012. Majuro has a port, shopping district, hotels, and an international airport. And the occasional mad runner.

Humans have inhabited the atoll for at least 2,000 years.

Finally, here’s the latest World Bank data for the Marshall Islands – with the year 2000 as a comparison.