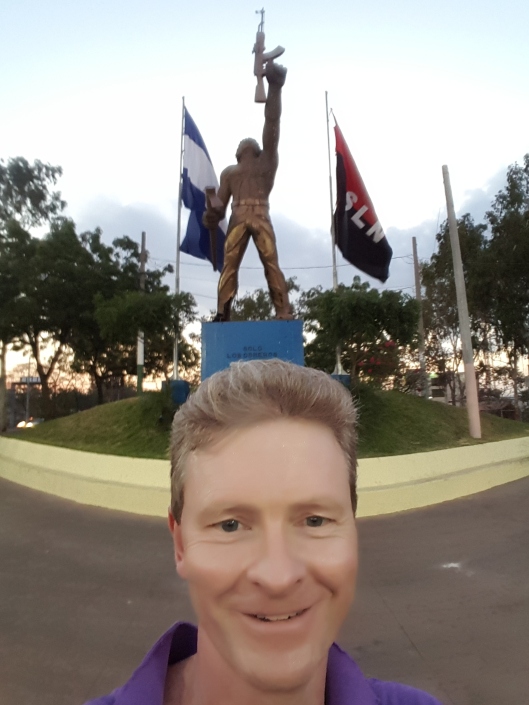 I’m not sure about double albums*. Even the good ones seem to pad out what might otherwise have been a great album. As for triple albums, has there ever been a consistently good one?

Take The Clash for example. Arguably the greatest band ever, they released London Calling – generally considered one of the greatest double albums ever. But it’s still not as good as their eponymous debut single album (US import version obvs) – which is one of the top ten best albums of all time.

They then released a triple album which, while it is one of the best triple albums ever, is a victory for indulgent quantity over quality.  They named it ‘Sandinista!’ after the rebels in Nicaragua who captured their, and the world’s, imagination as they took on the Somoza regime. 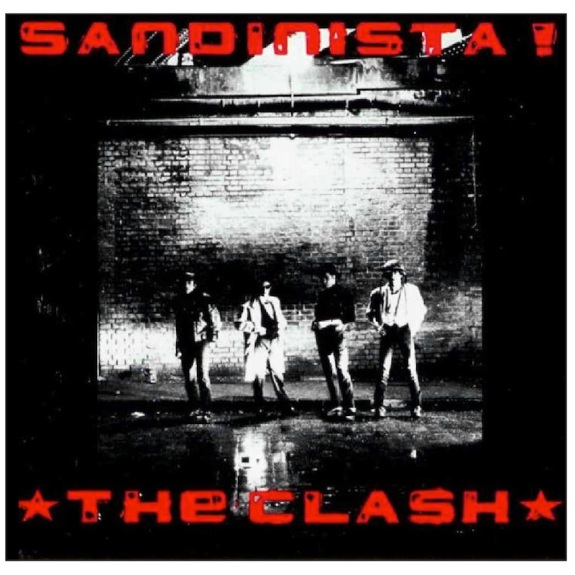 The Sandinistas came to power in 1979 and fairly shortly thereafter found themselves embroiled in a brutal civil war with the US backed “contras” in which an estimated 30 000 people died. In the second half of the 80s, this led to one of the most extraordinary stories to come out of the 20th Century : the Iran–Contra affair.

This involved the Reagan administration illegally selling arms to the radical Islamist regime in Iran. And using (part of) the proceeds to illegally fund the contras. All this at a time when the US and Iran were meant to be sworn enemies. Truth really is stranger than fiction. (Pls see Facts & Stats below for more detail.)

The Sandinistas lost power in the 1990 elections but came back in the 2006 elections and have been in power since (winning the 2011 and 2016 elections along the way amidst increasing concerns about the growing powers of President Ortega and his wife and the state of Nicaragua’s democracy.)

These haven’t always been easy years for the Nicaraguans. Nicaragua is reputedly the poorest country in central America (and the second poorest in the western hemisphere after Haiti). A tale I heard during my subsequent trip to Costa Rica appeared to underline this.

A Costa Rican guide was telling us about coffee and how dangerous coffee picking is in Costa Rica. Partly because coffee tends to grow on very steep slopes and the pickers have to be roped together. And partly because wasps, spiders and snakes live in coffee bushes and bites are common.

And who does this dangerous and low paid work? Not the relatively prosperous Costa Ricans of course. Apparently it’s all done by seasonal Nicaraguan migrants. Something to think about next time you sip on your skinny, flat, tall thingy in Starbucks / Costa / Nero.

However, not everything is gloomy. In recent years the (Sandinista) government has introduced a more open economy and has seen strong growth rates. (Governments (of whatever political hue) trying to run their economies centrally – and failing – before opening them up and seeing growth rates improve – is a story I come across all over word.)

It certainly wasn’t gloomy where I was dropped off near Puerto Salvador Allende (the recently renovated port area). Bizarrely and completely unexpectedly, I was in a space full of brightly lit tree statues (picture below). I subsequently discovered they were part of the 134 17-meter-tall “Trees of Life” dotted round town. Designed by Rosario Murillo, the wife of Nicaraguan President Daniel Ortega, they dominate the central area of Managua and give a sense of her influence. (She is now Nicaragua’s Vice-President.)

Leaving the Trees behind, I took a tour round the port area before heading up Avenue Simon Bolivar. There were Trees of Life and other brightly lit revolutionary something or others at every intersection. The picture at the top of the blog is the Unknown Soldier monument to the heroes of the revolution which is at the port end of Avenue Bolivar. Further south I passed a brightly lit mosaic of Hugo Chavez of Venezuela (picture below) who supposedly siphoned off a few millions from Venezuela’s oil revenues to support the Allende regime. 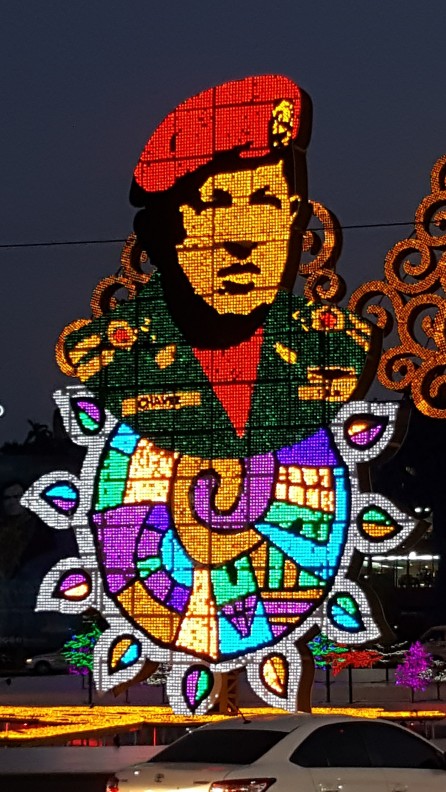 As the Avenue began to climb more steeply, I started to feel the run – my sixth in five days – in my legs. And, for some reason, I also felt it in my toenails which ached with every footstep. It was time to turn back to the Port via Parque Luis Alfonso Velasquez which was full of sports & leisure facilities, a cathedral and government buildings. A final km or so back along the lake shoreline and amongst the Trees and I was done in both senses of the word.

I wish I’d had longer in Nicaragua – the bits I saw were fascinating and I was tempted to extend my visit. Should I stay – or should I go? The age old dilemma..

Finally, if you’re not familiar with the Clash, or think they’re only about shouty punk music, then here are 15 tracks to get you started. Everyone a cracker.

Should I Stay or Should I Go

I’m so Bored with the USA

The Guns of Brixton

I Fought the Law

*For younger readers unfamiliar with albums as physical objects, a double album is defined as an audio album which spans two units of the primary medium in which it is sold, typically vinyl records or compact discs. (A triple album spans three units.)

NB It was apparent when researching this blog that the events of the Nicaraguan Revolution and the subsequent years of Sandinista rule remain controversial subjects. I have therefore tried to keep the following section focused on the basic facts.

Nicaragua is the largest country in the Central American isthmus, bordered by Honduras to the north, the Caribbean to the east, Costa Rica to the south, and the Pacific Ocean to the west. Nicaragua’s capital, Managua, is the country’s largest city and the third-largest city in Central America. The multi-ethnic population of six million includes indigenous peoples, Europeans, Africans, and Asians. The main language is Spanish. Native tribes on the eastern coast speak their own languages.

The Spanish Empire conquered the region in the 16th century. Nicaragua gained independence from Spain in 1821. Since its independence, Nicaragua has undergone periods of political unrest, dictatorship, and fiscal crisis—the most notable causes that led to the Nicaraguan Revolution of the 1960s and 1970s. Nicaragua is a representative democratic republic.

The Nicaraguan Revolution encompassed the rising opposition to the Somoza dictatorship in the 1960s and 1970s, the campaign led by the Sandinista National Liberation Front (FSLN) to violently oust the dictatorship in 1978–79, the subsequent efforts of the FSLN to govern Nicaragua from 1979 until 1990 and the Contra War which was waged between the FSLN and the Contrasfrom 1981-1990.

The Revolution marked a significant period in Nicaraguan history and revealed the country as one of the major proxy war battlegrounds of the Cold War with the events in the country rising to international attention.

Although the initial overthrow of the Somoza regime in 1978–79 was a bloody affair, the Contra War of the 1980s took the lives of tens of thousands of Nicaraguans and was the subject of fierce international debate. During the 1980s both the FSLN (a leftist collection of political parties) and the Contras (a rightist collection of counter-revolutionary groups) received large amounts of aid from the Cold War super-powers (respectively, the Soviet Union and the United States).

The Contra War ultimately ended following the signing of the Tela Accord in 1989 and the demobilization of the FSLN and Contra armies.] A second election in 1990 resulted in the election of a majority of anti-Sandinista parties and the FSLN handing over power.

The Iran–Contra affair also referred to as Irangate, Contragate or the Iran–Contra scandal, was a political scandal in the United States that occurred during the second term of the Reagan Administration. Senior administration officials secretly facilitated the sale of arms to Iran, which was the subject of an arms embargo. They hoped, thereby, to fund the Contras in Nicaragua while at the same time negotiating the release of several U.S. hostages. Under the Boland Amendment, further funding of the Contras by the government had been prohibited by Congress.

Sandinista! is the fourth studio album by the English band the Clash. It was released on 12 December 1980 as a triple album containing 36 tracks, with 6 songs on each side. Anticipating the “world music” trend of the 1980s, it features funk, reggae, jazz, gospel, rockabilly, folk, dub, rhythm and blues, calypso, disco, and rap. For the first time, the band’s traditional songwriting credits of Strummer and Jones were replaced by a generic credit to the Clash, and the band agreed to a decrease in album royalties in order to release the 3-LP at a low price.

Sandinista! was voted best album of the year in the Pazz & Jop critics poll in The Village Voice, and was ranked number 404 on the Rolling Stone list of “The 500 Greatest Albums of All Time” in 2003. Slant Magazine listed the album at number 85 on its “Best Albums of the 1980s” list in 2012.

Here’s the latest World Bank data for Nicaragua – with the year 2000 as a comparison.

Finally, here’s the data from Greatest Sporting Nation on how Nicaragua performed in the global sporting arena in 2016:

Global Cup – did not place

Per Capita Cup – did not place