I’m not quite sure when stag dos stopped being a single night of fun and games and became a weekend away somewhere pretending that, yes, there’s nothing I’d like more than to go out drinking heavily for the third night in a row. But whenever it was, it was (mostly) good news for cities with a reputation for good value (aka cheapish booze) within reach of the UK. Like Riga, the capital of Latvia.

I say ‘mostly’ because we Brits have an almost unique ability to make ourselves at home when abroad. This used to involve deciding that we were best placed to rule the country in question. But now, at least on stag dos, it involves dressing up, drinking too much and other general high jinks. (The picture below is of a beer bike – beloved of stag parties – in front of the House of Blackheads. Which seems appropriate as the Brotherhood of Blackheads were an association of unmarried foreigners.)

Regrettably these high jinks occasionally turn into one of those nights, you know the kind, where everyone takes off their clothes, dons comedy Hitler masks, vomits all over each other, gets into a fight with some locals and spends the night in a prison cell.*

Riga responded to this kind of behaviour in two main ways. The police set up a task force targeting rowdy stag parties. And the local Mafia developed ever more cunning ways to part inebriated Brits from their bank balances – mostly based on the premise that mullered men can usually persuade themselves that those ‘Russian supermodels’ just happened to be in the bar at the same time as them and just happened to fall for their banter.

Possibly because of these measures, or possibly because, with post Brexit exchange rates, foreign travel has recently become a lot more expensive, Riga is apparently attracting far fewer stag parties these days. (In the interests of Brexit balance I should also note that, if you want visit the UK, or buy British goods and services, then now is the time to do so.)

Certainly I didn’t see any stags during my pre-run tour round Riga’s old town. However, I did see – and I’d be the first to admit that it’s a tenuous connection – a number of animal themed sculptures. There was a life sized wooden horse with people clambering on top to have their pictures taken. Presumably blissfully unaware that parties of naked stags have been there before. Or so rumour has it. 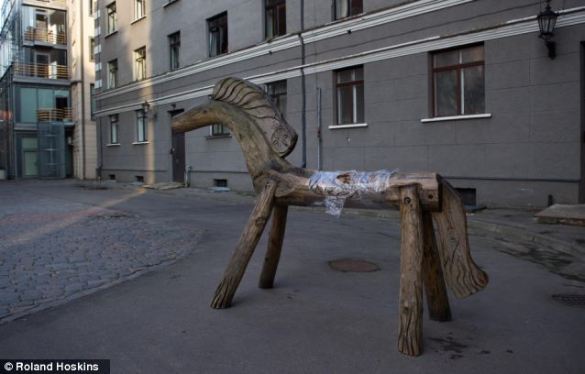 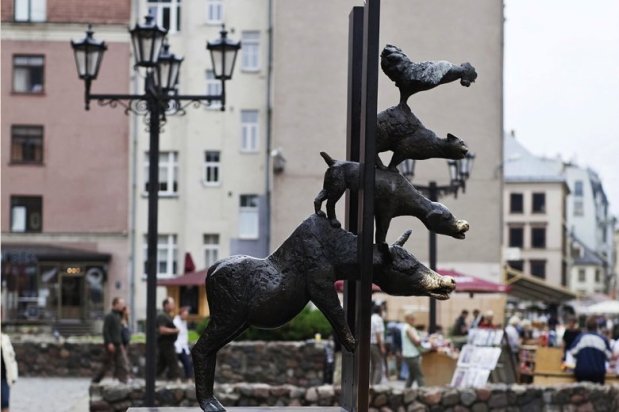 The tale’s about four animals, all past their prime, who, as so often happens with retiring farm animals, decide to leave their farms to become musicians in Bremen. They never make it to Bremen but they do manage to successfully deal with a gang of robbers by standing on top of each other and simultaneously going on the attack. And that’s about it. (It’s possible that the original brings the story to life a little better than that….)

In Riga, they say that, if you can jump up and touch all the animals before you hit the ground, then it’ll bring you good luck. Unfortunately I didn’t learn this until later on the run so I wasn’t able to give it a go.

Which brings us neatly onto the run itself. It was an excellent run, organised by Andra from the ever wonderful local British Embassy, and passing by many of Riga’s main sights

There were six of us in total and we started with a warm-up in the Kronvalda park before making our way into the old town. We stopped outside Riga Cathedral for a photo before crossing the Stone Bridge (Akmens Tilts) and passing by the enormous new National Library (please see video below). There’s a rather lovely story about the new library : when it came time to move books from the old library to the new one, this was done by a human chain of volunteers.

We ran through some some more green spaces before returning via Uzvaras park and the Victory Memorial. The Memorial, which is made up of a 79 metre tall obelisk and two groups of sculptures, is a controversial subject. It was erected in 1985 to commemorate the Soviet victory over Nazi Germany in World War II. (It was originally – and snappily – named the “Monument to the Liberators of Soviet Latvia and Riga from the German Fascist Invaders”.) However, for many Latvians it’s a symbol, not only of Soviet victory, but also of the Soviet re-occupation of Latvia. (In 1997 it was unsuccessfully bombed by members of the Latvian ultra-nationalist group Pērkonkrusts, two of whom died during the bombing.)

Readers of the Run the World Lithuania blog will be familiar with the background to all this but, for blog newbies, the Soviet Union invaded Latvia (and other Baltic states) in 1940 under the terms of the Molotov – von Ribbentrop pact between Germany and the Soviet Union. Germany subsequently occupied Latvia in 1941 before being kicked out by the Soviets in 1944. Latvia was then incorporated into the Soviet Union until independence in 1991. (To put this into context, the Latvian Museum of the Occupation treats the whole period from 1940-1991 as one of constant occupation.)

This is all so sensitive that none of my fellow runners felt able to join me for the photo in front of the Memorial – which is why I’m Billy No Mates in the picture below.

We crossed back over the Stone Bridge and a couple of us decided to open our legs (so to speak) and run across the bridge about as fast as we could. Garmin tells me that our peak pace was 3’ 53” per kilometre. Why am I mentioning this apparently trivial fact ? Because, even if we maintained that peak pace for the full 42.2 km of a marathon, it would still take us the best part of 2h 45’ to finish. And yet the top runners complete marathons in just over 2 hours. How do they do it? I just don’t know. 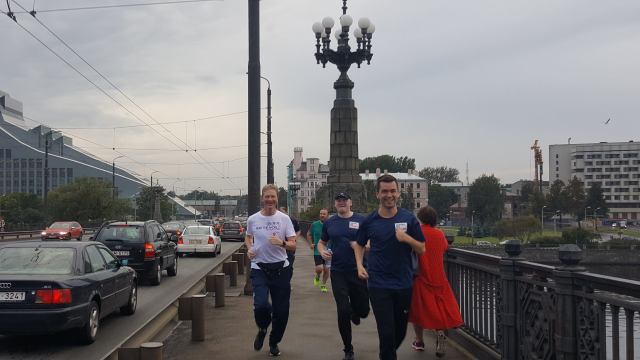 From the Stone Bridge we wound our way along the river front before turning through the old town and back to the Embassy and a celebratory drink in a local pub. It had been an entertaining and informative run, with some great company, and I hope my fellow runners enjoyed it as much as I did.

It just remains for me to say a huge thanks to Andra, Chris, Mihails, Oskars and Huw. Riga is a fine place end I hope to make it back there one day!

*Since my daughters can occasionally – with a certain amount of arm twisting and threats to withhold their pocket money – be induced to read these blogs, I want to be clear that I’ve never been involved in any evening remotely like this. Nor have 99.9%  of Brits abroad. In fact I’ve been told more than once that we’re some of the best tourists around. Apparently we spend a lot and don’t complain much.

Latvia is a country in the Baltic region of Northern Europe, one of the three Baltic states. It is bordered by Estonia to the north, Lithuania to the south, Russia to the east, and Belarus to the southeast, as well as sharing a maritime border with Sweden to the west. Latvia has 1,957,200 inhabitants and a territory of 64,589 km2 (24,938 sq mi). The country has a temperate seasonal climate.

After centuries of Swedish, Livonian, Polish and Russian rule, a rule mainly executed by the privileged Baltic German aristocracy, the Republic of Latvia was established on 18 November 1918 after declaring independence from Russia in the aftermath of World War I. However, by the 1930s, the country became increasingly autocratic after the coup in 1934 establishing an authoritarian regime under Kārlis Ulmanis. The country’s de facto independence was interrupted at the outset of World War II, beginning with Latvia’s forcible incorporation into the Soviet Union, followed by the invasion and occupation by Nazi Germany in 1941, and the re-occupation by the Soviets in 1944 to form the Latvian SSR for the next fifty years. The peaceful Singing Revolution, starting in 1987, called for Baltic emancipation from Soviet rule and condemning the “Stalinist” regime’s illegal takeover. It ended with the Declaration on the Restoration of Independence of the Republic of Latvia on 4 May 1990, and restoring de facto independence on 21 August 1991.

Latvia is a democratic republic and a highly developed country. Its capital Riga served as the European Capital of Culture in 2014. Latvian is the official language. As a consequence of centuries of Russian rule (1710–1918) and later Soviet occupation, Latvia is home to a large number of ethnic Russians (26.9% in Latvia), some of whom (14.1% of Latvian residents) have not gained citizenship, leaving them with no citizenship at all. Until World War II, Latvia also had significant minorities of ethnic Germans and Jews. Latvia is historically predominantly Protestant Lutheran. The Russian population has also brought a significant portion of Eastern Orthodox Christians.

It is a member of the European Union, NATO, the Council of Europe, the United Nations, CBSS, the IMF, NB8, NIB, OECD, OSCE, and WTO. For 2014, Latvia was listed 46th on the Human Development Index and as a high income country on 1 July 2014. A full member of the Eurozone, it uses the euro as its currency since 1 January 2014, replacing the Latvian lats.

Riga is the capital and the largest city of Latvia. With 639,630 inhabitants (2016),Riga is the largest city in the Baltic states, home to one third of Latvia’s population and one tenth of the Baltic states’ population. The city lies on the Gulf of Riga, at the mouth of the Daugava. Riga’s territory covers 307.17 square kilometres (118.60 square miles) and lies between one and ten metres (3 feet 3 inches and 32 feet 10 inches) above sea level,

Riga was founded in 1201 and is a former Hanseatic League member. Riga’s historical centre is a UNESCO World Heritage Site, noted for its Art Nouveau/Jugendstil architecture and 19th century wooden architecture. Riga was the European Capital of Culture during 2014, along with Umeå in Sweden.

Here’s the latest World Bank data for Latvia – with the year 2000 as a comparison.

Finally, here’s the data from Greatest Sporting Nation on how Lithuania performed in the global sporting arena in 2016:

The Global Cup aggregates results from over 1000 events across 80