Regular readers of this blog will be familiar with how grateful I am for the support I receive from British Embassies and High Commissions around the world. And the embassy in Conakry, the capital of Guinea, was no exception.

Ambassador Catherine Inglehearn and her husband Chris looked after me extremely well. There was a hot meal and a bed for the night waiting for me when I arrived at the Embassy. And a great run followed by breakfast the next morning. If only all countries could be like this…

We met at 6.30 am in a local park – the Jardin 2 Octobre (Guinea obtained its independence from France on 2nd October 1958.) It was still dark aka cool which, given the wilting in the heat / melanoma on the face problems I’ve had in the past, is always a good thing.

We set off at a sensible pace which gave me a chance to talk to the other runners amongst the group who mostly hailed from local embassies, NGOs and the EU. Plus a few rugby players (who didn’t seem particularly convinced when I told them I used to play rugby. Something to do with my physique apparently….)

Regular readers will also know that I can’t help noticing as I travel round the world, that women seem to do more than their fair share of the actual work.

Which isn’t to underestimate the importance of the contribution we men make. After all, someone needs to sit round with a coffee/beer, discuss the football, engage in witty banter, and generally put the world to rights.

However, it’s also true that someone needs to do all that tedious earning money, cooking, cleaning, looking after the kids kind of stuff. And, more often than not, that someone tends to be female.

It was therefore intriguing to chat with Cedric from United Purpose about their programme to support women building non-timber forest products (NTFPs) businesses. At least part of the rationale for which seems to be a hard-nosed financial assessment that supporting women entrepreneurs is one of the best ways to develop and grow the economy. 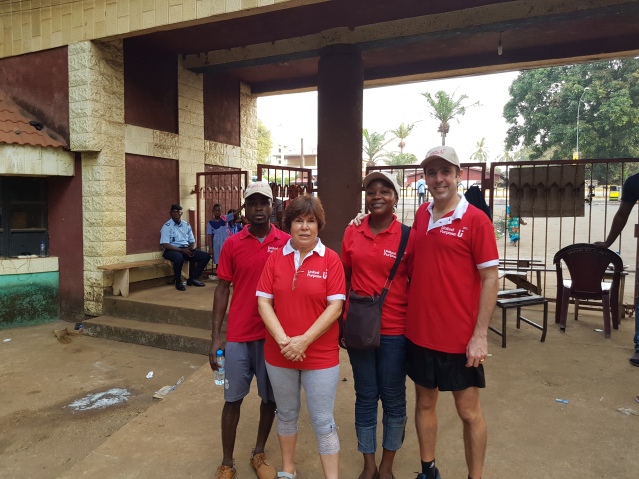 Guinea was my 134th country and its conversations like this, and a number of others that I had with my fellow runners (though perhaps not the one with the rugby players..) , that get me through these runs.

Or at least they got me through the first 9 kilometres. I ran the last kilometre or so with Chris (he was on his 11th or 12th kilometre by this point) at the more invigorating pace of 4’ 20” / km. For some reason, my conversation didn’t flow quite so smoothly (nor did my running…)

and some final photos.

Thank you Catherine, Chris and all my fellow runners – full list below – for the great run, the company, the cakes, the hospitality and the donations. Run the World T shirts are on their way!

Please like Run the World on Facebook to receive notification of future blogs and news about runs, races and running clubs across the world. And also just to show your support because, however silly it may sound, it makes all the travel and running that little bit easier if you think people care!

More photos and Facts & Stats below:

Guinea is a country on the western coast of Africa. Formerly known as French Guinea, the modern country is sometimes referred to as Guinea-Conakry in order to distinguish it from other countries with “Guinea” in the name and the eponymous region, such as Guinea-Bissau and Equatorial Guinea. Guinea has a population of 12.4 million and an area of 245,860 square kilometres (94,927 sq mi).

Guinea is a republic. The president is directly elected by the people and is head of state and head of government. The unicameral Guinean National Assembly is the legislative body of the country, and its members are also directly elected by the people. The judicial branch is led by the Guinea Supreme Court, the highest and final court of appeal in the country. The country is named after the Guinea region. Guinea is a traditional name for the region of Africa that lies along the Gulf of Guinea. It stretches north through the forested tropical regions and ends at the Sahel. The English term Guinea comes directly from the Portuguese word Guiné, which emerged in the mid-15th century to refer to the lands inhabited by the Guineus, a generic term for the black African peoples below the Senegal River, as opposed to the ‘tawny‘ Zenaga Berbers, above it, whom they called Azenegues or Moors.

Guinea is a predominantly Islamic country, with Muslims representing 85 percent of the population. Guinea’s people belong to twenty-four ethnic groups. French, the official language of Guinea, is the main language of communication in schools, in government administration, and the media, but more than twenty-four indigenous languages are also spoken.

Guinea’s economy is largely dependent on agriculture and mineral production. It is the world’s second largest producer of bauxite, and has rich deposits of diamonds and gold.[  The country was at the core of the 2014 Ebola outbreak. Human rights in Guinea remain a controversial issue. In 2011 the United States government claimed that torture by security forces, and abuse of women and children (e.g. female genital mutilation) were ongoing abuses of human rights.

Here’s the latest World Bank data for Guinea – with the year 2000 as a comparison.

Finally, here’s the data from Greatest Sporting Nation on how  Guinea performed in the global sporting arena in 2017: