Just about my least favourite part of visiting a new country is the airport transfer. What’s the best way to get to your hotel? How much should you pay? Do you need local currency? Is it safe?

So it was a great pleasure to walk through customs in Kinshasa, the capital of the Democratic Republic of Congo, and be met by someone who whisked me off to an air conditioned room to wait for my luggage to be collected. And then to be driven to my hotel through some of the liveliest street life I’ve seen to date. (No pic of the street life I’m afraid – I took a picture from my taxi in Lagos and a man got very angry and started to thump the car.)

All of this had been arranged by Gregory and the Running Club de Kinshasa. As was just about everything else during my time in Kinshasa including the Saturday morning city tour with Djambo.

We started at the train station and the fresco commemorating the 132 Europeans and 1800 African and Asian lives lost while building the first railway line. (You get the sense the European deaths may have been more carefully recorded…) 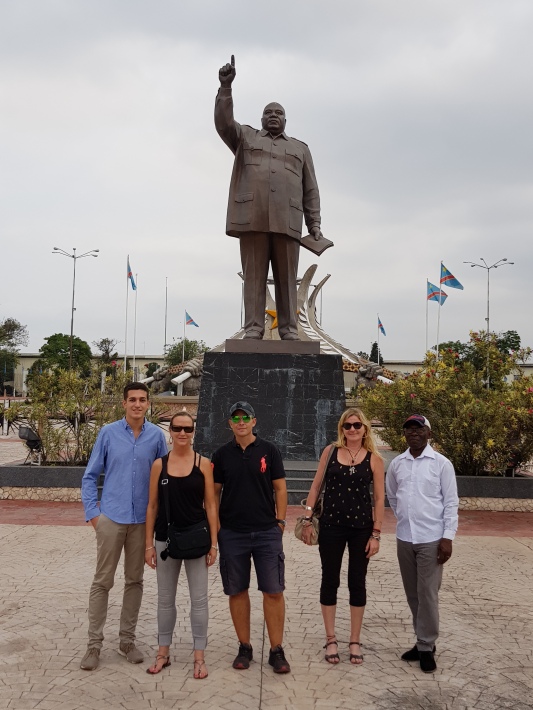 and mausoleum in the closed off part of the city centre

and then on to the Musee National de Kinshasa with its historic artefacts inside and colonial era works – including a huge statue of Stanley (famous for finding Livingstone and infamous for his part in King Leopold of Belgium setting up a personal colony in the the DRC – again pls see Facts & Stats below)  – outside.

They also arranged the run that evening which featured about 30 of us in total including Ambassador John Murton, Nick and Nico from the British embassy.

The route took us through the Gombe district – the westernised part of town that’s home to most of the Embassies and NGOs. And a very nice run it was too taking in the Congo river,

a family of pigs

and some good chats.

Afterwards, some of us went for a drink at the embassy before heading back to homes and hotels.

Altogether an excellent 24 hours in Kinshasa. Things went downhill from there but that’s for another blog!

In the meantime, it just remains for me to say a huge thank you to Gregory and the Running Club de Kinshasa, and to the Ambassador and Nick and Nico from the British Embassy.

I hope to see you all in London one day, ideally on July 4th 2020 for the UK leg of Run the World!

The Democratic Republic of the Congo also known as DR Congo, the DRC, Congo-Kinshasa or simply the Congo, is a country located in Central Africa. It is sometimes referred to by its former name of Zaire, which was its official name between 1971 and 1997. The DRC borders the Central African Republic and South Sudan to the north; Uganda, Rwanda, Burundi and Tanzania to the east; Zambia to the south; Angola to the southwest; and the Republic of the Congo and the Atlantic Ocean to the west. It is the second-largest country in Africa after Algeria, (the largest in Sub-Saharan Africa) by area and the 11th-largest in the world. With a population of over 78 million, the Democratic Republic of the Congo is the most populated officially Francophone country, the fourth-most-populated country in Africa and the 16th-most-populated country in the world.

Centred on the Congo Basin, the territory of the DRC was first inhabited by Central African foragers around 90,000 years ago and was reached by the Bantu expansion about 3,000 years ago. In the west, the Bantu Kingdom of Kongo ruled around the mouth of the Congo River from the 14th to 19th centuries. In the centre and east, the kingdoms of Luba and Lunda ruled from the 16th and 17th centuries to the 19th century. In the 1870s, just before the onset of the Scramble for Africa, European exploration of the Congo Basin was carried out, first led by Henry Morton Stanley under the sponsorship of King Leopold II of Belgium. Leopold formally acquired rights to the Congo territory at the Berlin Conference in 1885 and made the land his private property, naming it the Congo Free State. During the Free State, the colonial military unit, the Force Publique, forced the local population to produce rubber, and from 1885 to 1908, millions of Congolese died as a consequence of disease and exploitation. In 1908, Belgium, despite initial reluctance, formally annexed the Free State, which became the Belgian Congo.

The Belgian Congo achieved independence on 30 June 1960 under the name Republic of the Congo. Congolese nationalist Patrice Lumumba was elected the first Prime Minister, while Joseph Kasa-Vubu became the first President. Conflict arose over the administration of the territory, which became known as the Congo Crisis. The provinces of Katanga, under Moïse Tshombe, and South Kasai attempted to secede. After Lumumba turned to the Soviet Union for assistance in the crisis, the U.S. and Belgium became wary and oversaw his removal from office by Kasa-Vubu on 5 September and ultimate execution by Belgian-led Katangese troops on 17 January 1961. On 25 November 1965, Army Chief of Staff Joseph-Désiré Mobutu, who later renamed himself Mobutu Sese Seko, officially came into power through a coup d’état. In 1971, he renamed the country Zaire. The country was run as a dictatorial one-party state, with his Popular Movement of the Revolution as the sole legal party. Mobutu’s government received considerable support from the United States, due to its anti-communist stance during the Cold War. By the early 1990s, Mobutu’s government began to weaken. Destabilisation in the east resulting from the 1994 Rwandan genocide and disenfranchisement among the eastern Banyamulenge (Congolese Tutsi) population led to a 1996 invasion led by Tutsi FPR-ruled Rwanda, which began the First Congo War.

On 17 May 1997, Laurent-Désiré Kabila, a leader of Tutsi forces from the province of South Kivu, became President after Mobutu fled to Morocco, reverting the country’s name to the Democratic Republic of the Congo. Tensions between President Kabila and the Rwandan and Tutsi presence in the country led to the Second Congo War from 1998 to 2003. Ultimately, nine African countries and around twenty armed groups became involved in the war, which resulted in the deaths of 5.4 million people. The two wars devastated the country. President Laurent-Désiré Kabila was assassinated by one of his bodyguards on 16 January 2001 and was succeeded eight days later as President by his son Joseph.

The Democratic Republic of the Congo is extremely rich in natural resources but has had political instability, a lack of infrastructure, issues with corruption and centuries of both commercial and colonial extraction and exploitation with little holistic development. Besides the capital Kinshasa, the two next largest cities Lubumbashi and Mbuji-Mayi are both mining communities. DR Congo’s largest export is raw minerals, with China accepting over 50% of DRC’s exports in 2012. In 2016, DR Congo’s level of human development was ranked 176th out of 187 countries by the Human Development Index. As of 2018, around 600,000 Congolese have fled to neighbouring countries from conflicts in the centre and east of the DRC. Two million children risk starvation, and the fighting has displaced 4.5 million people. The sovereign state is a member of the United Nations, Non-Aligned Movement, African Union and COMESA.

Here’s the latest World Bank data for the Democratic Republic of Congo – with the year 2000 as a comparison.

Finally, here’s the data from Greatest Sporting Nation on how the DRC performed in the global sporting arena in 2017: