A Muslim, a Jew, a Hindu, a Catholic and an atheist went to Rome to see the Pope.

Sounds like the opening line of a joke – or even a football chant.*

But, in reality, it was a get together of old friends. Daud (a Muslim) lives in Rome with his wife Mirella (a Catholic). Josh (a Jew) was visiting with his wife Mita (a Hindu). It seemed like the right time for me (an atheist) to run in the Vatican.**

And so it was that our multi-denominational group found itself in the Vatican’s St. Peter’s Square one Monday morning. Sadly minus our Catholic, Mirella, who was looking after her sister who has cancer. However, as one member of the group pointed out, we were presumably in the one place in the world where we could be fairly certain of there being a Catholic or two in the vicinity.

And we had a choice to make. Daud knows a fantastic 10 km route through Rome that takes in most of the major sights. Jeff Fazio, whom, regular readers may recall, played a starring role in the St Kitts & Nevis blog, had sent me the route for his 5 km run round the perimeter of the Vatican. Or we could run round and round St Peter’s Square and hope that no one kicked us out.

The principle of Run the World is that, wherever possible, you run 10km in the country in question. So, rules being rules, we set off round St Peters Square. As you can see, quite a few people had turned out to watch us.

Now St Peter’s Square, or at least the part open to the public, is a circuit of about 2/3 of a kilometre. Which meant we would need to run round it 15 times. And, normally, running round a circuit 15 times is a little dull.

But, of course, St Peter’s is no ordinary square. It’s 320 meters long and 240 meters wide and can accommodate more than 300,000 people. Designed by Bernini it has 284 columns and 88 pilasters that flank the square in a colonnade of four rows. (Above the columns there are 140 statues of saints.)

And, brilliantly, you can run through these colonnades. Which is especially helpful when it rains or hails. As it did during our run – allowing me to make the following brief video which includes a truly excellent pun.

The video's not much to look at but it does include an excellent pun. Full story at dansgoldchallenge.wordpress.com

There is even a spot you can stand on in the square where all the columns line up perfectly so it looks like there is one row rather than four.

And overlooking the square is St Peter’s Basilica – quite possibly the largest Christian church in the world covering approximately 23000 square metres. I visited the basilica on my Sunday evening Vatican scouting trip – there are no queues at that time – and, even though I’m not remotely religious, when I walked in I involuntarily gasped out loud, “Jesus Christ Almighty”. Which I guess is the desired response.

The square is also overlooked by the famous Swiss guards. By now Daud was using his multi-lingual skills and general moustachioed charm to act as my personal PR and somehow talked the guards into agreeing to a quick photo shoot. I can confirm that the guards really do come from Switzerland (the one in the picture is from a village near Luzern) and that they won’t shake hands – presumably because their gloves are very nice and I was very sweaty (although I suppose it could also have been a security issue…)

Either way, nether the guards, nor the other security personnel, seemed to have any concerns about our running and we were able to complete our fifteen laps – ending up at the obelisk in the middle of the square (which was carried to Rome from Egypt in 1586.)

A truly memorable run in spectacular surroundings. Thank you, Vatican, for hosting us!

It just remains for me to say a huge thank you to Daud, Mirella, Josh, Mita, Don Francesco and the Palazzo Lupardi for all the support and all the hospitality in Rome. We’d love to see you in London on July 4th 2020 for the UK, and final, leg of Run the World!

*Arsenal and Chelsea fans have a delightful ditty that starts, “ A team called Tottenham Hotspur went to Rome to see the Pope”. Even if you’re not familiar with the ‘song’,  you can probably guess what the Pope is deemed to have said to the mighty Spurs…

**Strictly speaking, the Vatican isn’t a country by the standard I’ve adopted – membership of the Olympic movement. However, it does have observer status at the UN and, when I asked around, I realised that some people think of it as a country. Paranoid that someone might say that I’d run in every country in the world apart from one, I decided to play safe and run in the Vatican. 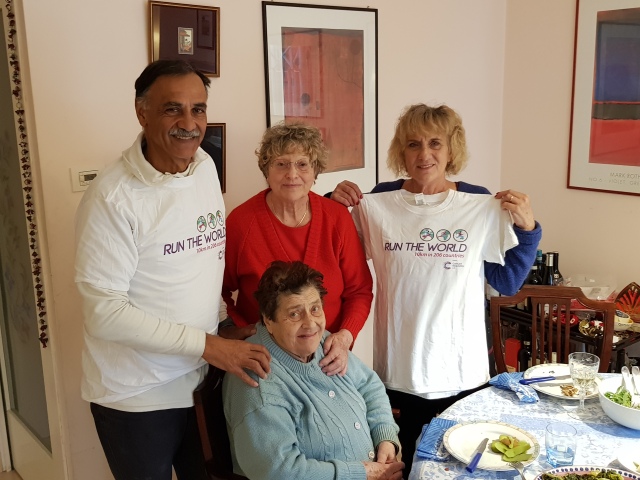 1 Response to The Vatican