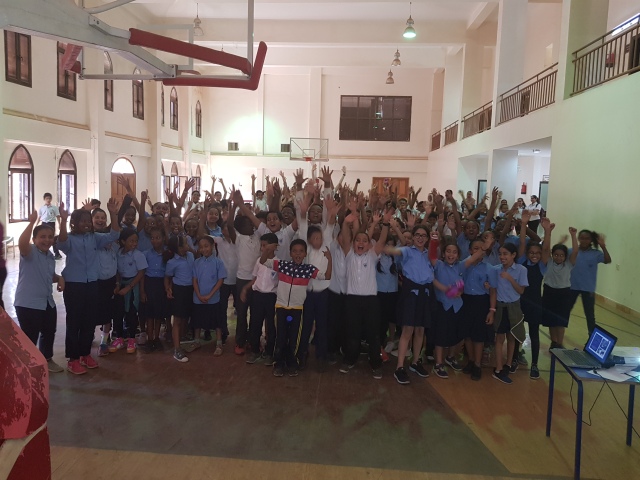 Every so often, a country I’ve just run in hits the international headlines.

Omar Hassan al-Bashir, who ruled Sudan with an iron fist since coming to power in a 1989 coup, was toppled by the military on 11th April 2019. The move came after months of protests which had resulted in up to 40 people being killed.

Somewhat concerned for the wellbeing of my recent contacts in Khartoum, I dropped them all an email and received this encouragingly positive reply from Minette: “Exciting times. I have been out every day and simply love the energy. People are friendly, pick up trash and really care about each other. Even the police and military are friendly, giving the peace sign as I drive past.”

Many of the demonstrations had taken place on Thursdays (the last day of the working week in Islamic countries) – and it just so happened that I was running in Khartoum on a Thursday. So we – British Ambassador Irfan Siddiq, Jamie Hamill and yours truly – needed somewhere safe to run and Tuti Island was the answer.

Tuti is 8 square kilometres of agricultural land in the middle of the Blue and White Niles. It supplies much of Khartoum’s fruit and vegetables using traditional manual methods of farming. Remarkably it’s just 100 meters away from bustling downtown Khartoum over a new suspension bridge.

It’s also a fine spot to run. Flat, cooled by the breeze off the Nile, and fascinating – we passed workmen building a traditional brick house

farmers tending their crops, numerous views over the Nile – and plenty of goats.

The the British Ambassador to Sudan, the Nile and some goats. Full story at dansgoldchallenge.wordpress.com.

The thing we didn’t see were any political demonstrations. (At this point I should note that everyone I met was keen to stress that Khartoum is, generally, a very safe place.)

Having roughly circumnavigated the island we crossed the bridge into Khartoum

The view from Tuti Bridge in Khartoum. Full story at dansgoldchallenge.wordpress.com

and ran north-west along the banks of the Blue Nile past the giant Coca-Cola bottle (coca-cola, and sugary sodas in general, being one of the subjects I cover in my school talks) 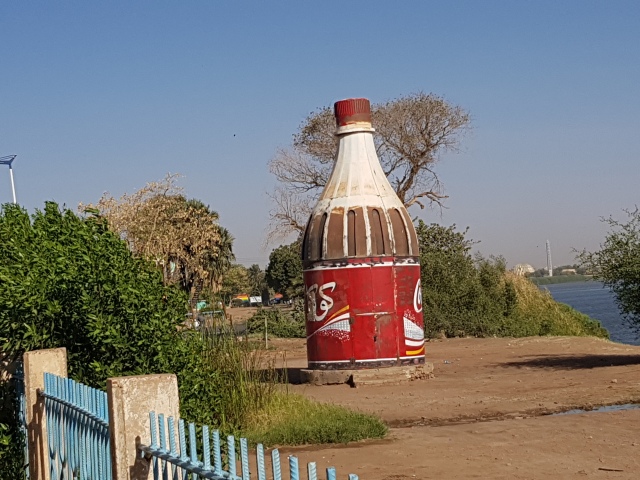 to Al Mogran Family Park. Al Mogran is an abandoned amusement park which will surely one day rediscover itself as a major tourist site because, at its tip, you can see the confluence of the White and Blue Niles. One muddy and slow moving –  the White Nile – and one clearer and swifter – the Blue Nile. Very cool.

The confluence of the Blue and the White Nile. Poor quality audio but very cool. Full story at dansgoldchallenge.wordpress.com

By now we’d finished the run

so it was time for a quick breakfast at my hotel (on which more later) before heading to the Unity High school where I talked to 140 junior school students and staff (top picture). I’m not sure who teaches geography there but they should give themselves a pat on the back because this was one of the best informed groups of students I’ve talked ever to. They were also one of the most engaged and it was a delight to talk to them.

Next up were 75 senior school students – a lively bunch who asked me some of the best questions I’ve had about the finances of Run the World. One of them even asked me to lend him some money…I obviously hadn’t done a very good job explaining that the idea of Run the World is that we give (donations to help fight cancer) rather than receive! 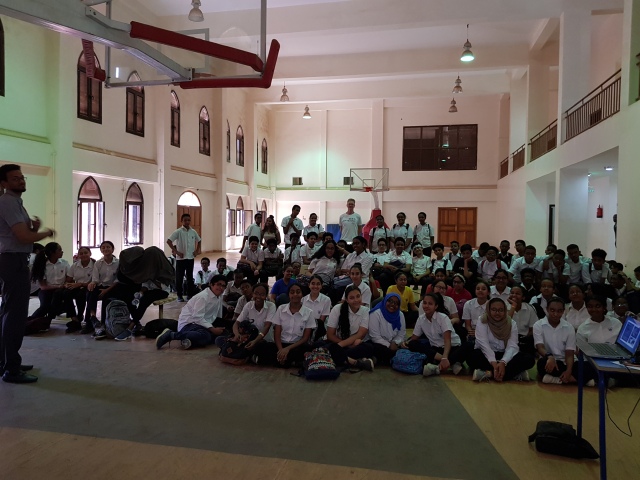 It was then time to return to my hotel – the Acropole. Run by George Pagoulatos its one of those places where everyone goes out of their way to be as helpful as possible. In my case, that included sorting out the letter of invitation (that allowed me to obtain my visa for Sudan) and arranging a transfer service that not only took me to, and from, the hotel but also somehow allowed me to skip most of the queues at the airport. Highly recommended.

It just remains for me to say a huge thank you to Ambassador Siddiq, Jamie, Randa and all the staff and students at Unity High, and George and the team at the Acropole for all the support, help and hospitality.

Sudan or the Sudan is a country in Northeast Africa. It is bordered by Egypt to the north, the Red Sea to the northeast, Eritrea to the east, Ethiopia to the southeast, South Sudan to the south, the Central African Republic to the southwest, Chad to the west, and Libya to the northwest. It houses 37 million people (2017) and occupies a total area of 1,861,484 square kilometres (718,722 square miles), making it the third-largest country in Africa. Sudan’s predominant religion is Islam, and its official languages are Arabic and English. The capital is Khartoum, located at the confluence of the Blue and White Nile.

Between the 14th and 15th centuries much of Sudan was settled by Muslim Arabs. From the 16th–19th centuries, central and eastern Sudan were dominated by the Funj sultanate, while Darfur ruled the west and the Ottomans the far north. This period saw extensive Islamization and Arabization.

From 1820 to 1874 the entirety of Sudan was conquered by the Muhammad Ali dynasty. Between 1881 and 1885 the harsh Egyptian reign was eventually met with a successful revolt led by the self-proclaimed Mahdi Muhammad Ahmad, resulting in the establishment of the Caliphate of Omdurman. This state was eventually destroyed in 1898 by the British, who would then govern Sudan together with Egypt.

The 20th century saw the growth of Sudanese nationalism and in 1953 Britain granted Sudan self-government. Independence was proclaimed on January 1, 1956. Since independence, Sudan has been ruled by a series of unstable parliamentary governments and military regimes. Under Gaafar Nimeiry, Sudan instituted Islamic law in 1983. This exacerbated the rift between the Arab north, the seat of the government and the black African animists and Christians in the south. Differences in language, religion, ethnicity and political power erupted in a civil war between government forces, strongly influenced by the National Islamic Front (NIF) and the southern rebels, whose most influential faction was the Sudan People’s Liberation Army (SPLA), eventually concluding in the independence of South Sudan in 2011. Since 2011, Sudan’s government has been engaged in a war with the Sudan Revolutionary Front. Human rights violations, religious persecution and allegations that Sudan had been a safe haven for terrorists isolated the country from most of the international community. In 1995, the United Nations (UN) imposed sanctions against Sudan.

Here’s the latest World Bank data for Sudan – with the year 2000 as a comparison.

Finally, here’s the data from Greatest Sporting Nation on how Sudan performed in the global sporting arena in 2018:

The Global Cup aggregates results from over 1000 events across 80 sports to produce the definitive annual ranking of international sporting success. The Per Capita Cup uses the same data to produce an annual per capita ranking