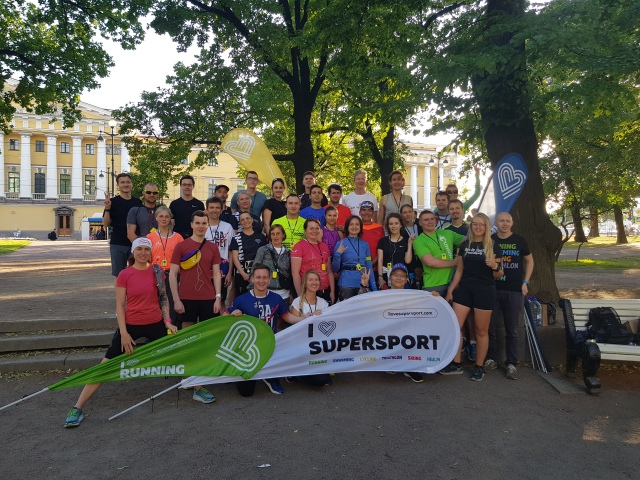 ‘There’s a Russian saying that you move to Moscow for work – and to St Petersburg for love,’ Varvara, I Love Supersport’s head of running, informed me.

And, although it wasn’t the kind of love she was referring to, it reminded me of falling a little bit in love with St Petersburg when I first visited it many years ago during the glasnost era.

I’d started that trip to Russia in Moscow where I’d bought some black market caviar, some black bread and some vodka. Which we then proceeded to consume while playing chess on the overnight sleeper to St Petersburg.

By now, Russian readers are probably laughing at my clichéd touristic attempts to throw myself into Russian life. But try to picture the situation back then. For the whole of my lifetime, it hadn’t really been possible for the average westerner to visit Russia. Then finally I was able to visit this country whose books I’d read and whose politics and history I’d studied. It felt very exciting at the time!

One of my main memories from that earlier visit was that the Hermitage – the second largest art museum in the world – was sensational and, as luck would have it, that’s pretty much where we started our run. 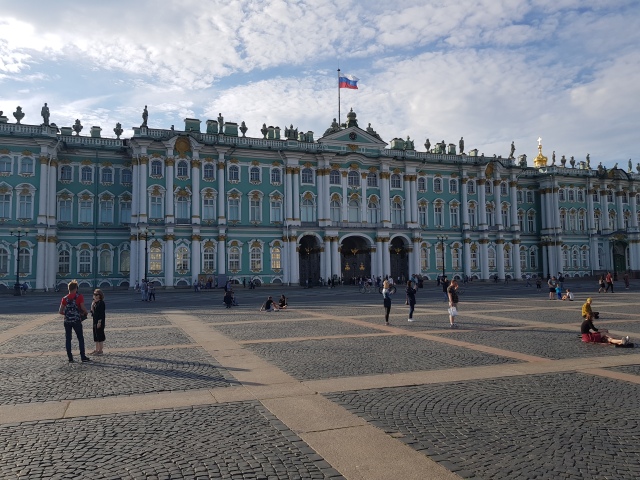 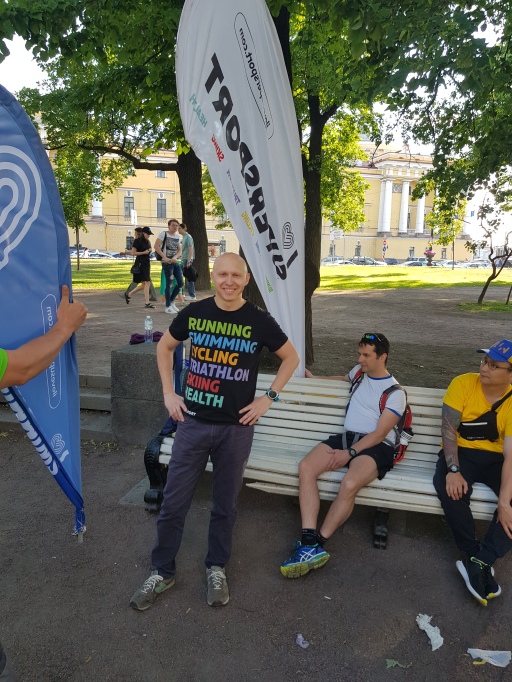 The twist being that it was a guided run – led by Polina of Run in Sun Pi. She’s a tour guide who loves running and is the perfect run leader. Not only did she devise a route that took us past many of St Petersburg’s major sights, but she also managed to keep up an almost constant commentary throughout the run. In both Russian and English. 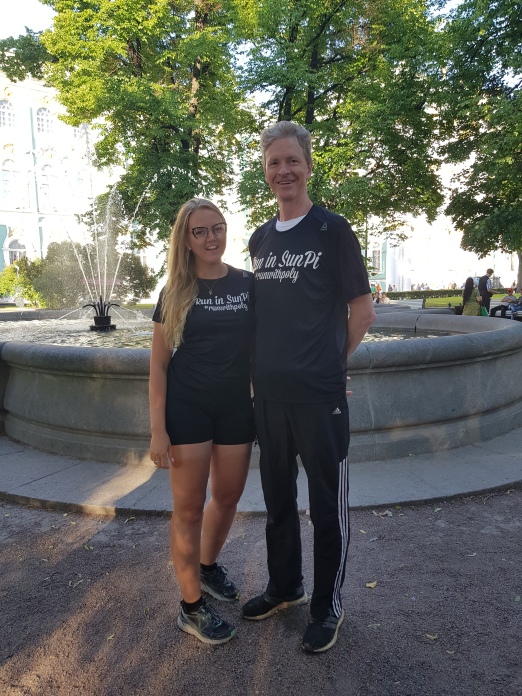 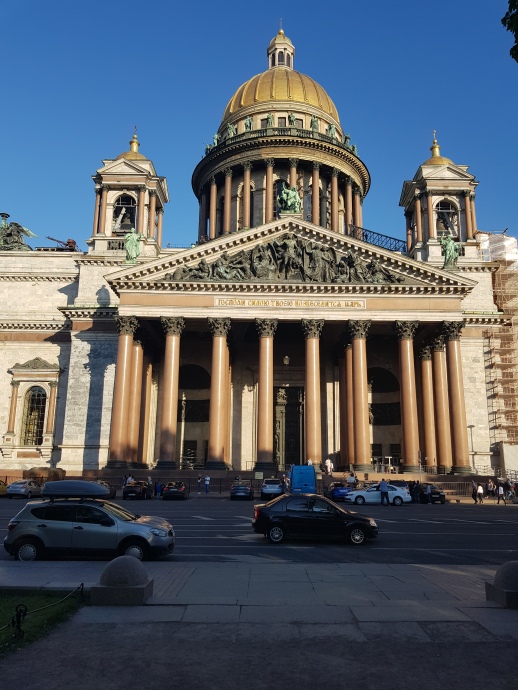 then past the Bronze Horseman 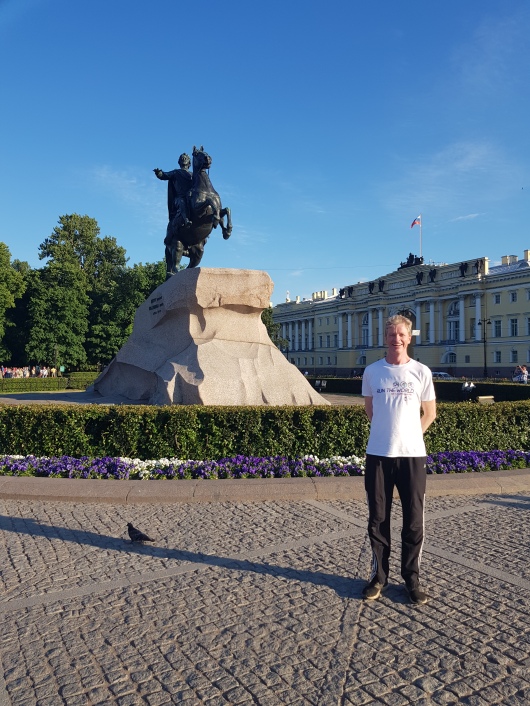 and (fittingly) onto English Embankment before crossing over the Neva on Blagoveschchensky Bridge.

Where I noticed that a drone appeared to be following us.

There appeared to be a drone following me on my run in st Petersburg. Why?? Was it that black market caviar I bought in Moscow all those years ago?!? Full story at dansgoldchallenge.wordpress.com

Why was it following us? Were the authorities still after me for buying that black market caviar?!?

Nothing of the sort. It turned out that Polina had arranged for the run to be filmed by drone. 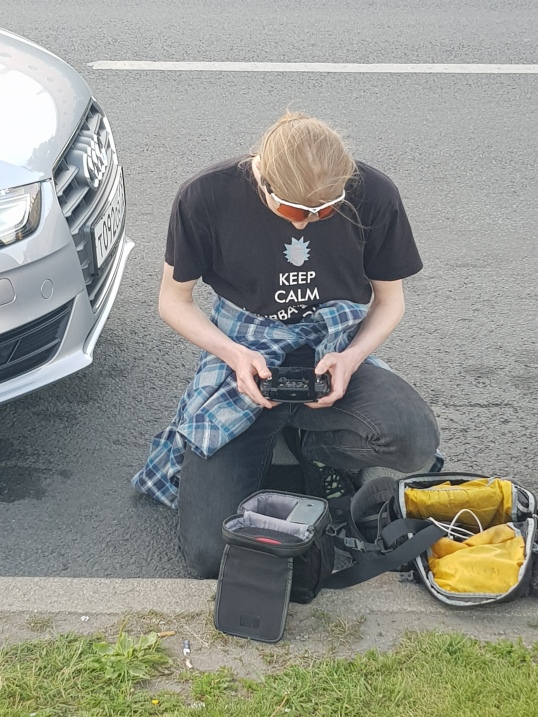 Once over the bridge we turned right on to Universitetskaya, 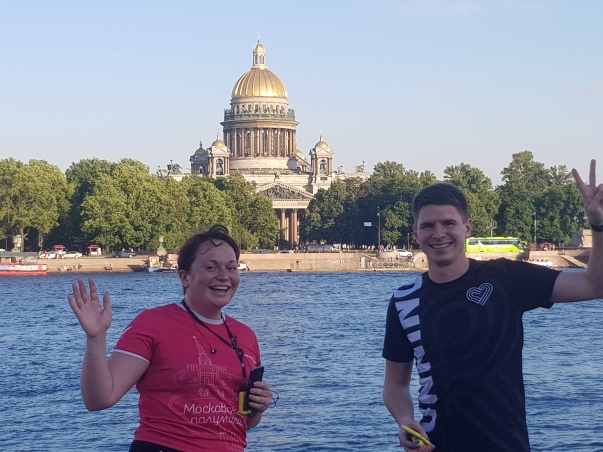 past the Rostral Columns 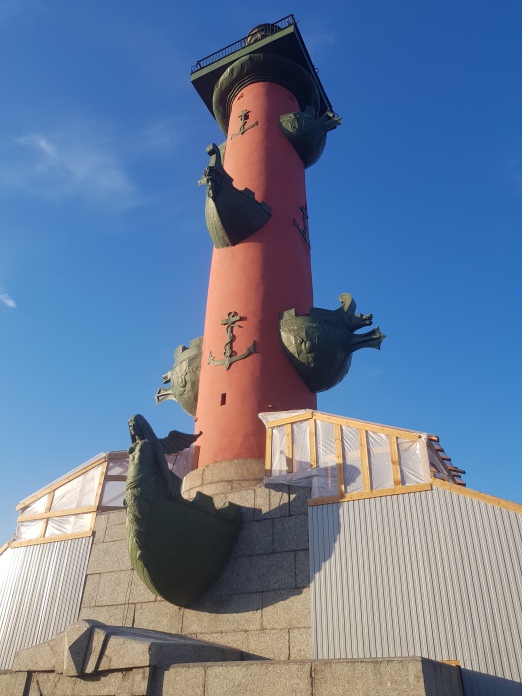 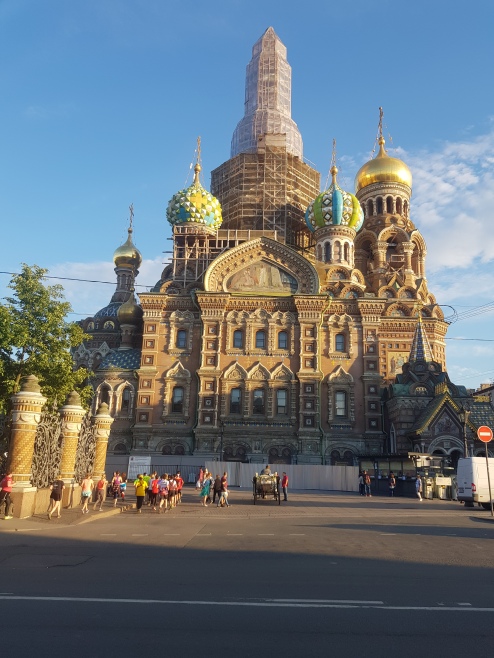 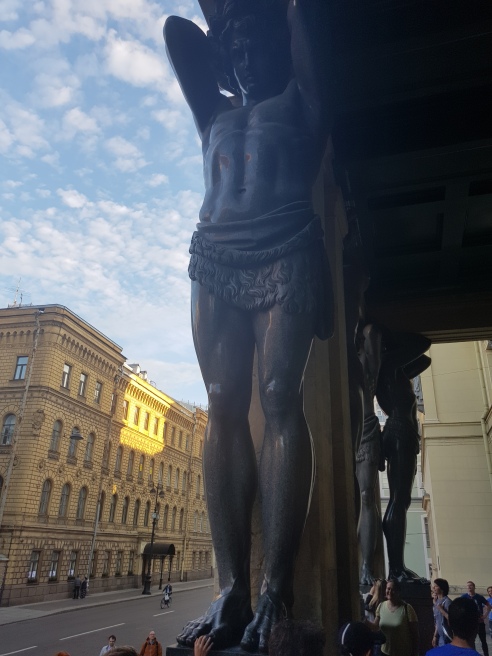 and then past the Hermitage itself

Running past the Hermitage in St Petersburg. Full story at dansgoldchallenge.wordpress.com

before hitting the 10km mark and final photos and goodbyes. 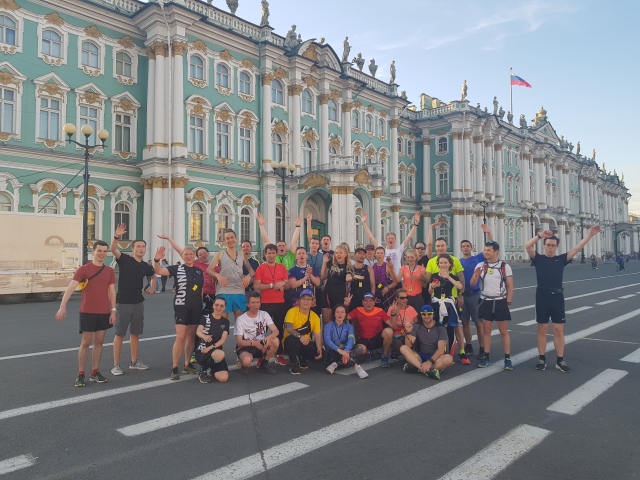 The walk back to my hotel after the run took me along Nevsky Prospekt. By the time I’d eaten, it was almost 11pm on a Monday night and yet there was a party atmosphere with the streets still full of people and live music on almost every street corner. Being in St Petersburg during the ‘white nights’ is something special.

As was the run. Thank you Artem, Varvara, I Love Supersport St Petersburg, Polina, Run in Sun Pi, Marina in Kazakhtsan, Bobby in Tajikistan and all my fellow runners for the fabulous welcome, company and support! 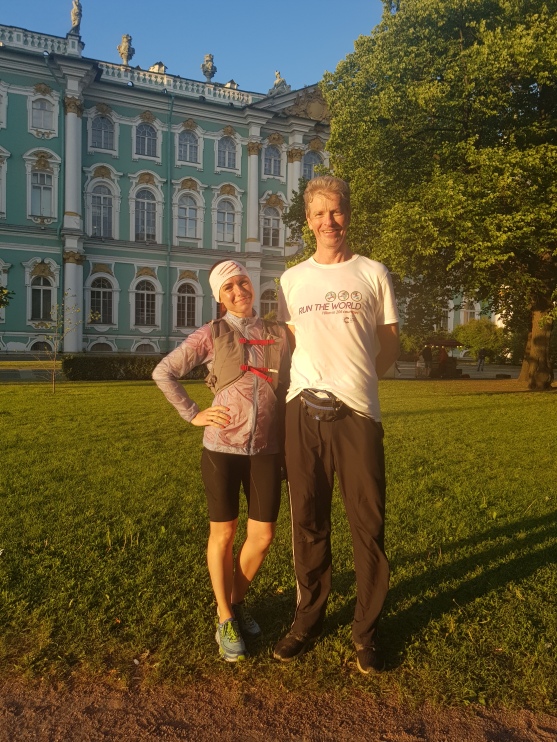 Russia is a transcontinental country in Eastern Europe and North Asia. At 17,125,200 square kilometres (6,612,100 sq mi), Russia is by a considerable margin the largest country in the world by area, covering more than one-eighth of the Earth’s inhabited land area, and the ninth most populous, with about 146.79 million people as of 2019, including Crimea. About 77% of the population live in the western, European part of the country. Russia’s capital, Moscow, is one of the largest cities in the world and the second largest city in Europe; other major cities include Saint Petersburg, Novosibirsk, Yekaterinburg and Nizhny Novgorod. Extending across the entirety of Northern Asia and much of Eastern Europe, Russia spans eleven time zones and incorporates a wide range of environments and landforms. From northwest to southeast, Russia shares land borders with Norway, Finland, Estonia, Latvia, Lithuania and Poland (both with Kaliningrad Oblast), Belarus, Ukraine, Georgia, Azerbaijan, Kazakhstan, China, Mongolia and North Korea. It shares maritime borders with Japan by the Sea of Okhotsk and the U.S. state of Alaska across the Bering Strait. However, Russia recognises two more countries that border it, Abkhazia and South Ossetia, both of which are internationally recognized as parts of Georgia.

The East Slavs emerged as a recognizable group in Europe between the 3rd and 8th centuries AD. Founded and ruled by a Varangian warrior elite and their descendants, the medieval state of Rus arose in the 9th century. In 988 it adopted Orthodox Christianity from the Byzantine Empire, beginning the synthesis of Byzantine and Slavic cultures that defined Russian culture for the next millennium. Rus ultimately disintegrated into a number of smaller states; most of the Rus’ lands were overrun by the Mongol invasion and became tributaries of the nomadic Golden Horde in the 13th century. The Grand Duchy of Moscow gradually reunified the surrounding Russian principalities and achieved independence from the Golden Horde. By the 18th century, the nation had greatly expanded through conquest, annexation, and exploration to become the Russian Empire, which was the third largest empire in history, stretching from Poland on the west to Alaska on the east.

Following the Russian Revolution, the Russian Soviet Federative Socialist Republic became the largest and leading constituent of the Union of Soviet Socialist Republics, the world’s first constitutionally socialist state. The Soviet Union played a decisive role in the Allied victory in World War II and emerged as a recognized superpower and rival to the United States during the Cold War. The Soviet era saw some of the most significant technological achievements of the 20th century, including the world’s first human-made satellite and the launching of the first humans in space. By the end of 1990, the Soviet Union had the world’s second largest economy, largest standing military in the world and the largest stockpile of weapons of mass destruction. Following the dissolution of the Soviet Union in 1991, twelve independent republics emerged from the USSR: Russia, Ukraine, Belarus, Kazakhstan, Uzbekistan, Armenia, Azerbaijan, Georgia, Kyrgyzstan, Moldova, Tajikistan, Turkmenistan and the Baltic states regained independence: Estonia, Latvia, Lithuania; the Russian SFSR reconstituted itself as the Russian Federation and is recognized as the continuing legal personality and a successor of the Soviet Union. It is governed as a federal semi-presidential republic.

Russia’s economy ranks as the twelfth largest by nominal GDP and sixth largest by purchasing power parity in 2018. Russia’s extensive mineral and energy resources are the largest such reserves in the world, making it one of the leading producers of oil and natural gas globally. The country is one of the five recognized nuclear weapons states and possesses the largest stockpile of weapons of mass destruction. It is a permanent member of the United Nations Security Council.

Here’s the latest World Bank data for Russia – with the year 2000 as a comparison.

Finally, here’s the data from Greatest Sporting Nation on how Russia performed in the global sporting arena in 2018: