Earlier this week I had the pleasure of giving a Run the World talk* at Wapping High School in Tower Hamlets. I mentioned during the talk that, as part of my London Borough Challenge** I’d be running 10km in Tower Hamlets after the talk. We often combine a run in the school grounds with my talks and I would have loved the students to join me for some of the run. However, Wapping High School’s outdoor playing space is a fifth floor terrace. It’s great – and has tremendous views over London – but perhaps isn’t quite right for a mass run.

So I set off from the school on my own – south towards the river and where I used to work at Metropolitan Wharf on Wapping Wall.

At the time, office space was cheap in Wapping. We were offered river side space at £2 / square foot ; or land side offices at £1 / square foot. As we were a computer games start-up without any money we went for the land side. For that we got one (occasionally) working toilet and a bit of dark space without views. There weren’t any communal facilities.

I was therefore a touch surprised when I went back to the office for the first time in years (decades..) and found this (to be fair to readers, the video below will probably only be of interest if you worked at Renegade or the Bitmap Brothers…):

For ex Renegade/ Bitmap folk. This is what our old offices now look like. Full story at dansgoldchallenge.wordpress.com

Many years later, in the lead up to the 2012 Olympic Games, I used to go to Canary Wharf for meetings with LOCOG (the London Organising Committee for the Olympic Games). At the time we were running an Olympic and Paralympic inspired charity challenge called ‘Gold Challenge’***. We ended up working with LOCOG and putting on the pre-Games test event for 20 000 people in the Olympic Stadium. Which was fantastic because we were able to invite huge numbers of school pupils, people with disabilities and charity fundraisers to run/wheelchair 100 m in the Olympic stadium.

Enough reminiscing – back to the run!

From Wapping I ran east along the Thames, through Canary Wharf

The towers of Canary Wharf from my Tower Hamlets run. Full story at dansgoldchallenge.wordpress.com

past the East India Dock and on to the river Lea.

Where I came across section 6 of the Lea Valley Walk (it’s called the London Walk on the various maps along the way). I followed this through the Bow Creek Ecology Park and past businesses new(ish) – a paper recycling plant

Eventually I got to Three Mills at the confluence of the River Lea and the Limehouse Cut. 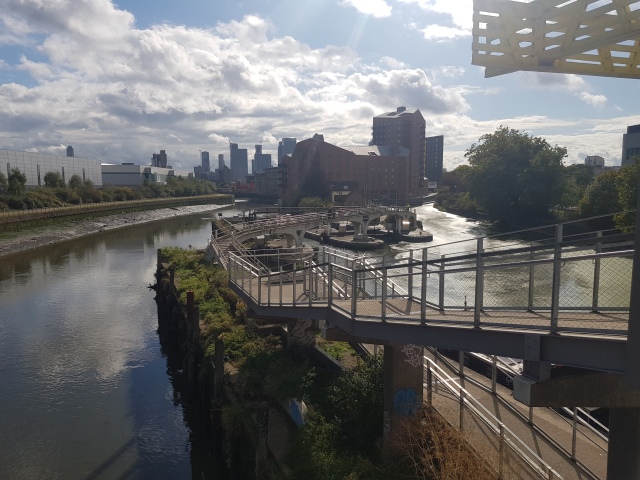 From here you can follow the river Lea north to the Olympic Park (which is a great run/walk) or take the Limehouse Cut south-west to Limehouse Basin (also a great run/walk). However, I was getting towards the end of my 10 km so I ran past Bromley-by-Bow tube station to Bow Road to catch the tube home.

The run only covered part of Tower Hamlets but I hope I’ve managed to convey a sense of some of the brilliant running / walking opportunities in the borough!

It just remains for me to say thank you to Hayley and all the staff and students at Wapping High School for the warm welcome. I hope the students enjoyed the talk as much as I enjoyed talking to them!

And I also hope they will stay involved with Run the World – either via social media (links below) or by joining in the UK, and final, leg of Run the World on Hampstead Heath on 4th July 2020.

Finally, thank you to any reader who got this far for bearing with the blog as I went down my Tower Hamlets memory lane!

*For any readers who weren’t at the talk, a little bit of background. I’m currently undertaking a challenge – Run the World – to complete a 10km run in all 206 countries in the world. (I’ve run in 176 countries to date.) I’m doing the challenge to raise funds for Cancer Research and to promote the importance of an active healthy lifestyle.

The Run the World school talk combines stories from my runs around the world with healthy living advice focusing on exercise, diet, weight, smoking and alcohol

***Gold Challenge launched in late 2010 and ran an Olympic and Paralympic inspired challenge in the run up to London 2012. Gold Challenge partnered with the British Olympic Association/Team GB, Paralympics GB and Sport England and was part of the official London 2012 mass participation legacy programme.  Gold Challenge also worked closely with LOCOG and hosted one of the pre-Games test events in the Olympic Stadium.

The challenge had over 105,000 participants. More than 200 schools and 100 corporates took part including large employers such as GlaxoSmithKline, Atos, EDF, Cisco, John Lewis and Coca Cola. In excess of £1.5 million was raised for Gold Challenge’s 150 charity partners who included household names such as Cancer Research UK, Oxfam, the NSPCC and Help for Heroes.