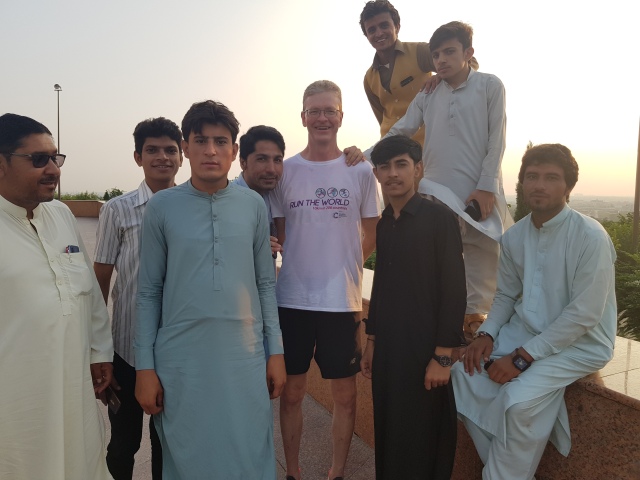 A young man approached me at the Pakistan Monument and asked, “Do you think Pakistan is peaceable?” It became clear that he was anxious about how his country is viewed internationally and I hope I did my bit for international relations by telling him that my (the British) government advises that Islamabad is generally safe to visit.* The Foreign Office also notes that, in 2018, there were an estimated 484,000 – mostly trouble-free – visits by British nationals to Pakistan. (Having said that, some areas, for example Kashmir, require great caution.)

The dangers of international travel have been much on my mind recently as I was originally scheduled to visit Afghanistan straight after Pakistan. Timing that left a lot to be desired because it meant I would be in Kabul just after the general elections in Afghanistan. A period during which there was felt to be a real risk of an upsurge in violence. Eventually, after much agonising, I decided to change my schedule and postpone my trip to Kabul.

The resulting delays in confirming my plans, combined with further delays in obtaining my visa, meant that, despite the best efforts of my old college friend Daud Khan (who last graced this blog when playing a starring role in the Vatican run), we hadn’t found anyone for me to run with. In short, I was running on my own.

And it must say something about the friendliness of the Pakistanis I met that I never felt alone.

I started at my hotel, the Ramada – who’d looked after me in exemplary fashion with an early check in and complimentary airport transfers – where the guards were happy to pose with me. 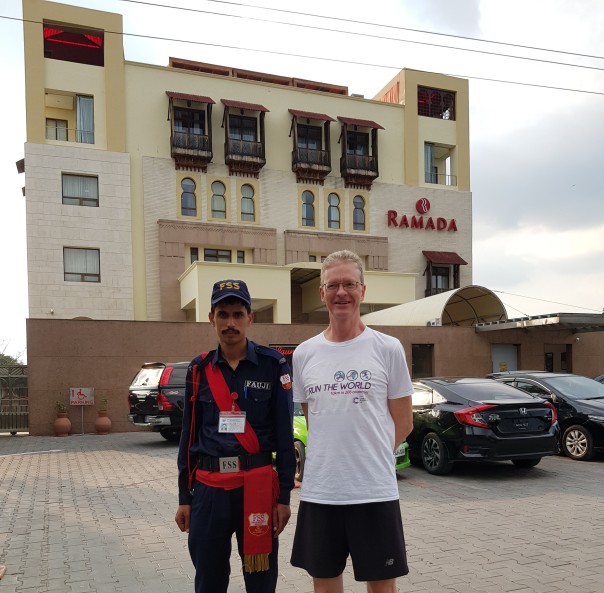 I turned right out of the hotel down Murree Road and then right onto Garden Avenue. Garden Avenue, as the name suggests, cuts through a large green area and past what I took to be a number of venerable institutions including the Tennis Federation 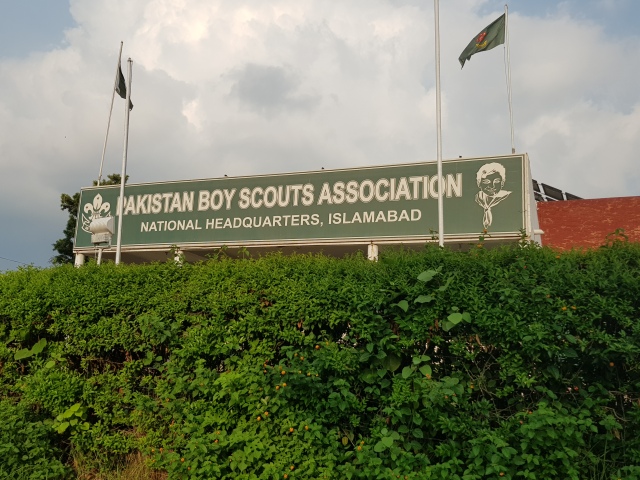 The Jinnah Stadium and sports complex

And finally, one for us Brits, the Amir Khan Boxing Hall.

and the aforementioned conversation – which ended with a number of selfies and the group photo at the top of the blog.

A quick visit to the Islamabad View Point for a vista over the city,

another set of selfies with a different group 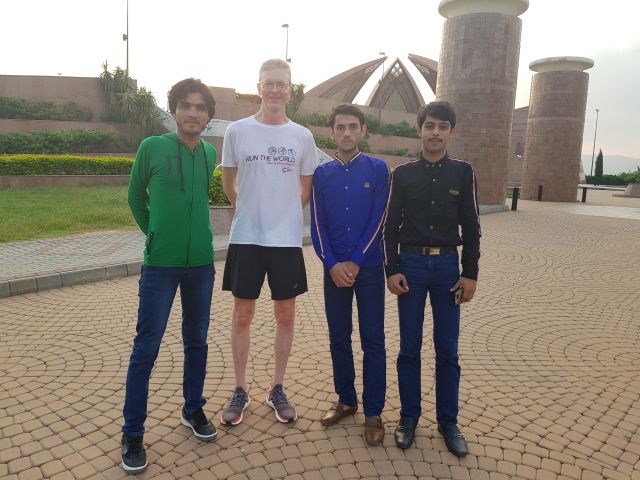 and then it was time to retrace my steps to my hotel.

I’ve had some pain in my right leg recently so I’d started the run at a very gentle pace. However, the longer I ran, the better I felt. So I decided to speed up a little to test out my leg. I ran the 9th kilometre in 5’04” and the tenth in 4’24”. Not bad by my standards – though I should perhaps put that in context by noting that the average pace of the winner of the women’s 10 000 m at the recent athletics world championships was just over 3 minutes per km…

It just remains for me to thank Daud, Nadir and the Ramada hotel for all their help and the good people of Islamabad for a delightful run!

*Of course, no travel is entirely risk-free – especially in big cities. You should always be careful, stay away from political demonstrations and, if you feel like it might be dangerous, then trust your instinct.

Pakistan is a country in South Asia. It is the world’s sixth-most populous country with a population exceeding 212,742,631 people. In area, it is the 33rd-largest country, spanning 881,913 square kilometres (340,509 square miles). Pakistan has a 1,046-kilometre (650-mile) coastline along the Arabian Sea and Gulf of Oman in the south and is bordered by India to the east, Afghanistan to the west, Iran to the southwest, and China in the northeast. It is separated narrowly from Tajikistan by Afghanistan’s Wakhan Corridor in the northwest, and also shares a maritime border with Oman.

The territory that now constitutes Pakistan was the site of several ancient cultures and intertwined with the history of the broader Indian subcontinent. The area has been ruled by numerous empires and dynasties, including the Persian Achaemenid Empire, Alexander III of Macedon, the Seleucid Empire, the Indian Maurya Empire, the Gupta Empire, the Arab Umayyad Caliphate, the Delhi Sultanate, the Mongol Empire, the Mughal Empire, the Afghan Durrani Empire, the Sikh Empire (partially) and, most recently, the British Indian Empire. Pakistan is the only country to have been created in the name of Islam. It is an ethnically and linguistically diverse country, with a similarly diverse geography and wildlife. Initially a dominion, Pakistan adopted a constitution in 1956, becoming an Islamic republic. An ethnic civil war and Indian military intervention in 1971 resulted in the secession of East Pakistan as the new country of Bangladesh. In 1973, Pakistan adopted a new constitution which stipulated that all laws are to conform to the injunctions of Islam as laid down in the Quran and Sunnah.

A middle power, Pakistan has the sixth-largest standing armed forces in the world and is also a nuclear power as well as a declared nuclear-weapons state, the second in South Asia and the only nation in the Muslim world to have that status. Pakistan has a semi-industrialised economy with a well-integrated agriculture sector and a growing services sector. It is ranked among the emerging and growth-leading economies of the world, and is backed by one of the world’s largest and fastest-growing middle class. Pakistan’s political history since independence has been characterized by periods of military rule, political instability and conflicts with India. The country continues to face challenging problems, including overpopulation, terrorism, poverty, illiteracy, and corruption. Pakistan is a member of the UN, the Shanghai Cooperation Organisation, the OIC, the Commonwealth of Nations, the SAARC, the Islamic Military Counter Terrorism Coalition and the Major non-NATO ally.

Here’s the latest World Bank data for Pakistan – with the year 2000 as a comparison.

Finally, here’s the data from Greatest Sporting Nation on how Pakistan performed in the global sporting arena in 2018: