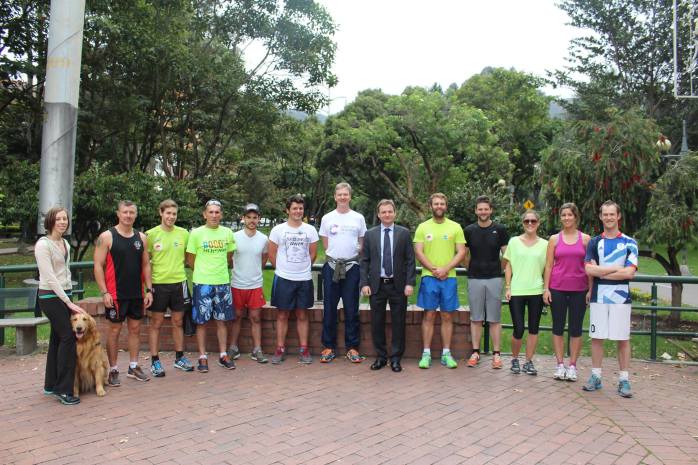 Colombia.  Home of cocaine and the murder capitals of the world – Medellin and Bogota. Right?

Well, I doubt the cocaine’s going anywhere fast – at least, not as long as global demand stays high. (Apparently Colombians don’t use it much.) However, the violence has decreased. Not completely – but enough to make a real difference.

I knew this because my nephew and niece have family in Bogota and they say it’s a great place to visit. However, I suspect many Europeans still see it as a violent country, riven by civil war and fighting between drug lords.

In fact, peace talks are currently taking place in Cuba between the government and FARC – the Revolutionary Armed Forces of Colombia or Fuerzas Armadas Revolucionarias de Colombia. (FARC are a guerrilla organisation who have been involved in the Colombian conflict since 1964 and are generally believed to fund their operations from a range of illegal activities including drug production and distribution.)

One of the fascinating side-effects of my Run the World travels is that I see a huge variety of political situations in the countries I visit. Often there either is, or has been until recently, a degree of political tension and turbulence. I won’t pretend to have the expertise to give readers a detailed analysis of the situation in Colombia. However, I think its safe to say that, when two sides have been fighting for a long time, its hard enough to sit down together. Overcoming the emotion on both sides and reaching a lasting peace agreement can be an elusive and difficult task.

Sometimes you’ve just got to have sympathy for the politicians and civil servants who wrestle with these issues!

But for the meantime, although you should, as in any major city, be careful, Bogota feels a whole lot safer than Caracas did the day before. And no-one batted an eyelid when I walked the few blocks from my hotel to Parque el Virrey.

Where I met a team from the British Embassy – pictured above – and the elegant and delightful Margaret (aunt of a friend in the UK) who was to show me round Bogota after the run.

Bogota is 2,640 metres (8,660 ft) above sea level – the highest place I’d run to date. And, as we started our run up a barely discernible incline, I felt it. In fact, after just 200 m, breathing was becoming painful. Hmmm. How bad was this going to get? Was I going to disgrace myself and not finish?

The whole of the first loop of the park was difficult – far more difficult than it should have been. Especially given that the others were taking it easy on me and setting a gentle pace.

But then, as I was told it would, my body started to acclimatise. Each lap got progressively easier and, by the end it wasn’t too bad. Not too great either. But that was because it was my 6th run on the trip rather than the altitude.

The company, on the other hand, had been excellent and kept me going during some tricky moments. Thank you Tracey and Michael for organising everything and thank you, Ambassador, for your team’s help and for taking the time to come and see us off at the start of the run. As I’ve said many times before, we are lucky to have our diplomats to support us when we’re abroad.

And last, and certainly not least, thank you Margaret for showing me round Bogota and the memorable hospitality!