Can’t tell you the day started well. Up at 4am after 3 hours of sleep and into my running gear for the flight from Armenia to Moldova.  Travelling with a running belt in place of a carry-on bag isn’t ideal but I was hoping to take advantage of a 1h 40’ stopover in Moscow airport to get my Russian run done without the hassle of obtaining a visa. (Russian visa application forms apparently require you to list every country you’ve visited in the last 5 years. I’ve just had to do that for my US visa application and, believe me, it’s a time consuming and best avoided process given my recent travels.)

In the event, the flight to Moscow was delayed – which is apparently quite common now that Russian airlines have to avoid Ukrainian airspace. And then it took ages to deplane. And then the coach took a tour of the entire airport before dropping us off at the terminal. And then security had a few questions about my itinerary.

All of which meant that I needed to complete my 10km in a new world record if I was to make my next flight. Setting world records is never easy at the best of times, let alone in the confines of a busy airport. So I decided to give up on the plan and just relax and wait for the flight. And, after that, the day got considerably better.

Sporter – picture below – is Moldova’s leading sports portal and Serghei, its director, had invited me to their offices for an interview to be broadcast on Facebook. It’s part of Simpals, a fast growing media group chaired by Dimitrii Volosin, and they’re well set up for live interviews. 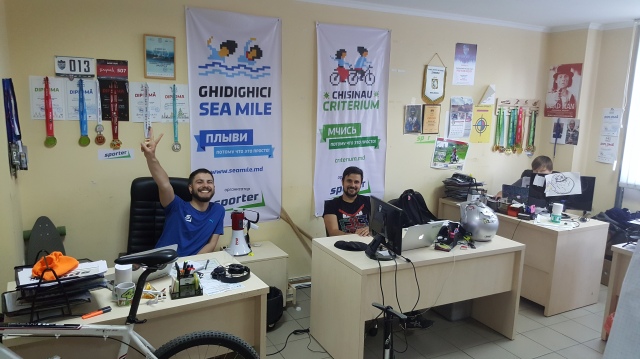 David Lutsik*** interviewed me and, towards those end of the interview, he threw me one of those questions that interviewees dread : “Which country has been your best run to date?” Partly for reasons of diplomacy, and partly because I’ve genuinely had so many good experiences, I gave a politician’s answer and declined to name any specific country. He assured me that the answer would be ‘Moldova’ by the end of the day.

After the interview we set off for Parcul Catedrelai (Cathedral Park) in the centre of Chisinau. Bordered to the wst by Government House, it contains the Arcul de Triomf and the Nativity of Christ Metropolita Cathedral – two of Chisinau’s top sights.

We were joined there by Ambassador Lucy Joyce and Victoria from the British Embassy and by Jonathan from the Moscow Embassy who just happened to be in Chisinau. Picture below with Serghei and Dimitrii. 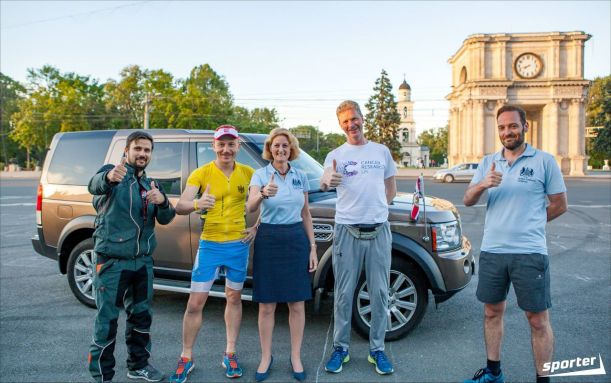 Sporter organises the Chisinau marathon and a number of other mass participation events in Moldova. (Please contact me if you’d like to visit Moldova and take part in one of their events). They know what they’re doing when it comes to organising runs and it showed. There were about 50 of us and we were led out by a police escort and a van pumping out Nirvana’s ‘Smells Like Teen Spirit’.

The route was one lap of the Chisinau marathon course which circles through the city centre. It was my sixth run in 5 days and it would normally have been a struggle. But somehow, between the music and the company, it was painless and almost, dare I say it, fun.

The conversation I remember best from the run concerned emigration. A staggering one third of Moldavans are estimated to have emigrated in recent years. (See Facts & Stats below). And it’s no great secret why people leave. The average wage in Moldova is about 200 Euros a month. The cost of living is less than in Western Europe – but not that much less. So people leave to better their lives and look after their families.

In Western Europe this emigration is known as immigration and is, of course, the subject of a great deal of debate and angst. However, my suspicion is that, in years to come, the biggest issue with emigration / immigration will be seen to be the economic and social impact on the countries that have lost huge numbers of young and enterprising people.

The run finished back at Cathedral Park with Moldova’s Eurovision Song Contest entry blaring from the sound system. Time for some arms-round-shoulders-in-a-circle-dancing, a load of selfies and a final few words from yours truly. “Firstly, huge thanks to everyone who came along; to Serghei, Dimitrii, David and everyone at Sporter for organising a great run ; and to Ambassador Joyce, Victoria and Jonathan from the British embassy for their support.”

“Secondly, I was asked earlier today which of my 112 runs to date has been my favourite. The answer is, of course, Moldova”.

Watch Sporter’s video of the run and you’ll get a sense of why I enjoyed it so much.

From Wikipedia, the free encyclopaedia

Moldova is a landlocked country in Eastern Europe, bordered by Romania to the west and Ukraine to the north, east, and south (by way of the disputed territory of Transnistria). The capital city is Chișinău.

Most of the Moldovan territory was a part of the Principality of Moldavia from the 14th century until 1812, when it was ceded to the Russian Empire by the Ottoman Empire (to which Moldavia was a vassal state) and became known as Bessarabia. In 1856, southern Bessarabia was returned to Moldavia, which three years later united with Wallachia to form Romania, but Russian rule was restored over the whole of the region in 1878. During the 1917 Russian Revolution, Bessarabia became an autonomous and then independent Moldavian Democratic Republic, however in 1918 it was integrated into Romania following a vote of its assembly. The decision was disputed by Soviet Russia, which, in 1924, allowed the establishment, within the Ukrainian SSR, of a Moldavian autonomous republic (MASSR) on partial Moldovan-inhabited territories to the east of the Dniester. In 1940, as a consequence of the Molotov–Ribbentrop Pact, Romania was compelled to cede Bessarabia to the Soviet Union, leading to the creation of the Moldavian Soviet Socialist Republic (Moldavian SSR), which included the greater part of Bessarabia and the westernmost strip of the former MASSR.

On 27 August 1991, as part of the dissolution of the Soviet Union, the Moldavian SSR declared independence and took the name Moldova. The current Constitution of Moldova was adopted in 1994. The strip of the Moldovan territory on the east bank of the Dniester river has been under the de facto control of the breakaway government of Transnistria since 1990.

Due to a decrease in industrial and agricultural output following the dissolution of the Soviet Union, the service sector has grown to dominate Moldova’s economy and currently composes over 60% of the nation’s GDP. Its economy is the poorest in Europe in per capita terms. Moldova is also the least visited country in Europe by tourists with only 11,000 annually recorded visitors from abroad.

Moldova is a parliamentary republic with a president as head of state and a prime minister as head of government. It is a member state of the United Nations, the Council of Europe, the Organization of the Black Sea Economic Cooperation (BSEC) and aspires to join the European Union.

Emigration from Moldova is a mass phenomenon, having a significant impact on the country’s demographics and economy.

Confronted with economic instability, collapsing incomes, and rapidly rising unemployment that accompanied the fall of the Soviet Union, people began emigrating from Moldova on a large scale in the first half of the 1990s. The Information and Security Service of the Republic of Moldova has estimated that 1,200,000 to two million Moldovan citizens (almost 45% of a population of some 3.6 million) are working abroad, most illegally. Only around 80,000 are estimated to be in their destination country legally. Russia (especially Moscow region), Italy, Ukraine, Romania, Portugal, Spain, Greece, Turkey, and Israel are the main destinations (in decreasing order of importance). Due to the clandestine nature of these migration flows, however, no official statistics exist. Some 500,000 Moldovans are thought to be working in Russia, mainly in construction. Another estimate puts the number of Moldovans in Italy at 500,000. Moldovan citizens are drawn toward countries that speak their language or a similar one, such as Moldovans to Romance-speaking countries, Russians and Ukrainians to Russia or Ukraine, or the Turkic-speaking Gagauz to Turkey.

Remittances from Moldovans abroad account for almost 24,9% of Moldova’s GDP, the fifth-highest percentage in the world.

Here’s the latest World Bank data for Moldova – with the year 2000 as a comparison.

Finally, here’s the data from Greatest Sporting Nation on how Moldova performed in the global sporting arena in 2016:

***In the interests of fairness, I should note that David is one of the nicest people you could meet  – and, yes, he did pre warn me about that question.