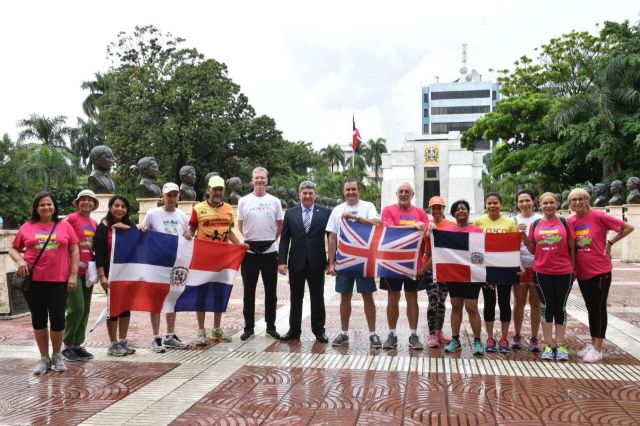 The world is an endlessly fascinating place and I rarely, if ever, visit a country without it being memorable in some way. The people I meet, the sights I see, the run itself. There’s always something special.

And then, every so often, there’s a country that’s an absolute jewel in the crown. One such country was the Dominican Republic. 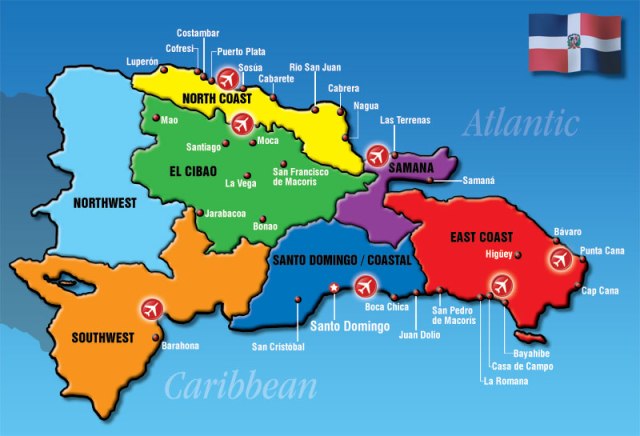 Mind you, the day hadn’t started well (in San Juan). I was so tired that I slept through my alarm clock and only woke up when the hotel rang to say that my taxi was waiting. I looked at my watch. It was 6.08 am and my flight was due to leave at 7.50. Detailed calculations revealed that it was unlikely I’d get to the airport the prescribed two hours in advance.

I dressed and packed at pace, jumped into the taxi and blurted out that I needed to get to the airport as quickly as possible. Nothing happened.

My driver wasn’t in car. He was helping himself to a coffee in the hotel café.

He eventually showed up, turned the radio to 11 and put his foot down. I tried to get him to slow down and turn the radio off – but he couldn’t hear me. With ears bleeding from the radio, and ribs dislocated from the G forces, I was deposited at the airport.

I rushed to check in and then looked at my watch. 6.33am.

25 minutes from waking up to checking in. If only all travel could be that quick.

The taxi at the other end wasn’t much better – was that coffee that had been spilt all over the back seat? – but once I got to my hotel in Santo Domingo, the capital of the Dominican Republic, things improved markedly.

When a country goes well its usually because someone has done a great job of promoting the run locally. In the Dominican Republic that person was Mike O’Kelly. 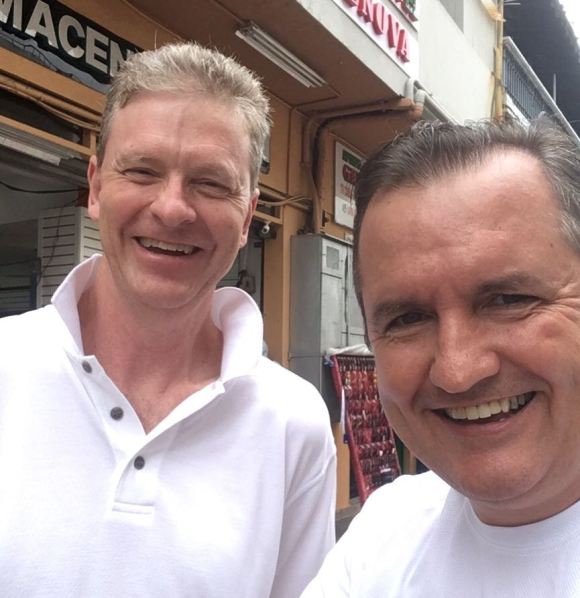 Mike works in the mining industry and is GM of the local Hash Harriers (for anyone interested in learning more about the Hash Harriers, pls see the Estonian and Ghanaian blogs.)

Mike had arranged some press coverage in the week leading up to the run (see media links above) and for the press and TV to come down for the start of the run in the Parque Independecia. Ambassador Chris Campbell and Laura from the British Embassy were also good enough to join us. 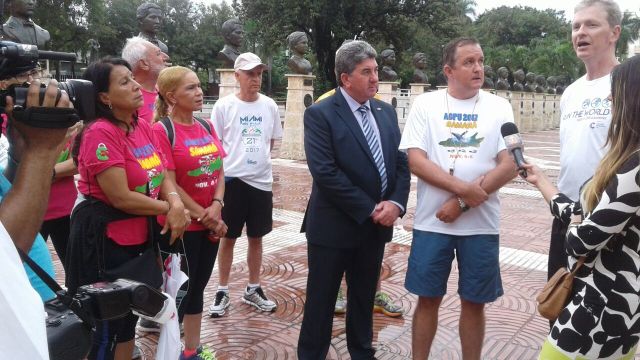 After multiple photos and various interviews – most of which Mike and the Ambassador  did due to their superior Spanish (and media skills…) –  we were ready to go.

There were about 15 of us at the start including a number of local hashers in their AGPU (Annual General P*ss Up) tops. We set off for the sea shore and the road Google maps tells me is called Av George Washington (but which I think the locals were calling Malecon.)  We went west almost as far as Centro de los Heroes before retracing our steps 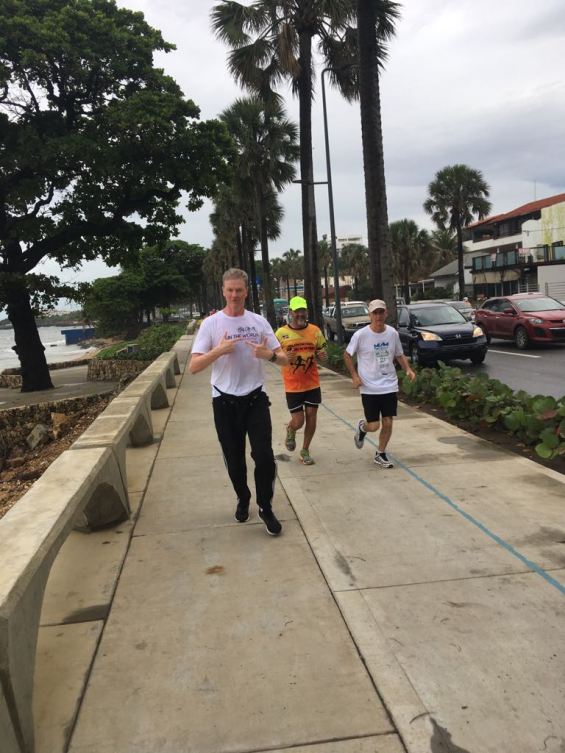 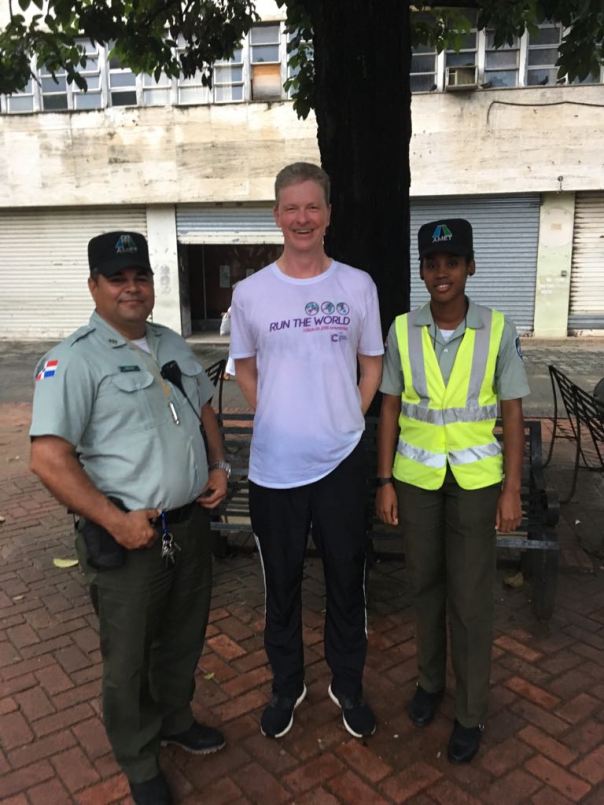 through the back streets of the Zona Colonial to the finish line in Parque Colon. 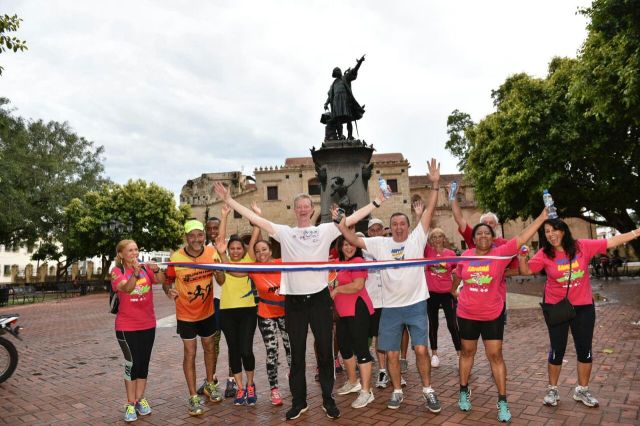 Altogether an excellent run and one which, in true hasher style, we subsequently celebrated over beer, plantain chips and salsa in a local bar. 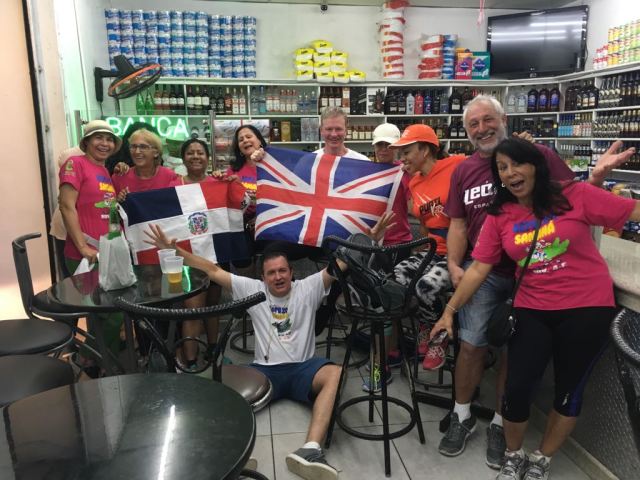 As we also raised quite a lot of money for Cancer Research, I don’t think I could have had any complaints if my time in Santo Domingo had finished there. However, the next morning I was invited to talk at St George’s School which was founded by the legendary Mrs Tedeja OBE. It was a great opportunity to talk about Run the World, Cancer Research and the importance of an active, healthy lifestyle in the fight against cancer (and other diseases). And it was a lot of fun answering 30 minutes of questions from the students after the talk. 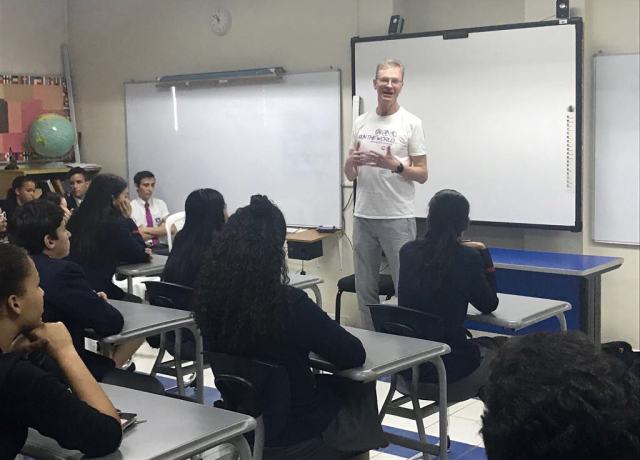 From the St George’s Instagram account “Today our Sophomores were visited by Dan Thompson. Dan has undertaken to run 10k in every country by the 2020 Olympics in Tokyo. With his Run the World Challenge, Dan is promoting the physical and mental health benefits of sport and physical activity, and raising money for cancer research. It was a great honor to meet you!”

OK, so that’s a blatant piece of self-promotion but it is important to keep hammering home the message about why we should all be physically active. On that note, if anyone knows an audience that would benefit from a healthy living talk – dressed up in a wrapper of a madman’s adventures running round the world – then I’m your man.

It just remains for me to say a huge thanks to Mike, Ambassador Campbell, Laura, Mrs Maureen Tedeja, everyone else who joined the run and the staff and pupils at St. George’s. It was a pleasure meeting you all and I hope to be back in Santo Domingo one of these days! 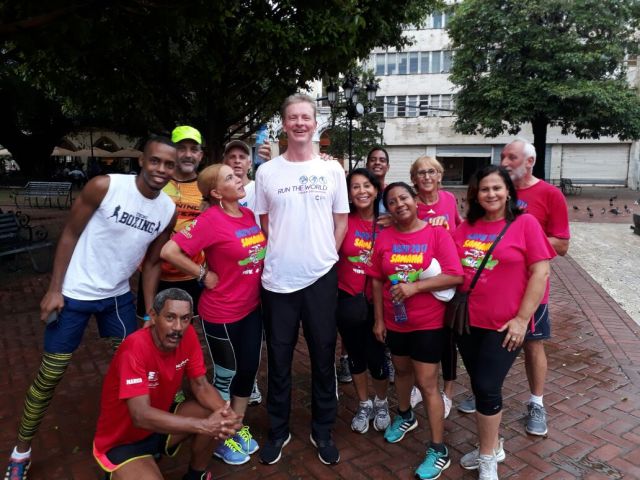 Finally, for anyone’s who interested, here’s a video of the run.

Please like Run the World on Facebook to receive notification of future blogs and news about runs, races and running clubs across the world. And please donate to Cancer Research if you’d like to help fight the global scourge that is cancer.

The Dominican Republic is a country located on the island of Hispaniola in the Caribbean region which it shares with the nation of Haiti, The Dominican Republic is the second-largest Caribbean nation by area (after Cuba) at 48,445 square kilometers (18,705 sq mi), and third by population with approximately 10 million people, of which approximately three million live in the metropolitan area of Santo Domingo, the capital city.

Christopher Columbus landed on the island on December 5, 1492, which the native Taíno people had inhabited since the 7th century. The colony of Santo Domingo became the site of the first permanent European settlement in the Americas, the oldest continuously inhabited city, and the first seat of the Spanish colonial rule in the New World. After more than three hundred years of Spanish rule the Dominican people declared independence in November 1821.

The newly independent Dominicans were forcefully annexed by Haiti in February 1822. Independence came 22 years later after victory in the Dominican War of Independence in 1844. (I was told that there’s still considerable resentment towards Haiti over the annexation.)

Over the next 72 years the Dominican Republic experienced mostly internal conflicts and a brief return to colonial status before permanently ousting Spanish rule during the Dominican War of Restoration of 1865. A United States occupation lasted eight years between 1916 and 1924, and a subsequent calm and prosperous six-year period under Horacio Vásquez Lajara was followed by the dictatorship of Rafael Leónidas Trujillo until 1961. A civil war in 1965, the country’s last, was ended by U.S. military occupation and was followed by the authoritarian rule of Joaquín Balaguer, 1966–1978. Since then, the Dominican Republic has moved toward representative democracy[ and has been led by Leonel Fernández for most of the time since 1996. Danilo Medina, the Dominican Republic’s current president, succeeded Fernandez in 2012, winning 51% of the electoral vote over his opponent ex-president Hipólito Mejía.

The Dominican Republic has the ninth-largest economy in Latin America and is the largest economy in the Caribbean and Central American region. Over the last two decades, the Dominican Republic has had one of the fastest-growing economies in the Americas – with an average real GDP growth rate of 5.4% between 1992 and 2014. GDP growth in 2014 and 2015 reached 7.3 and 7.0%, respectively, the highest in the Western Hemisphere. In the first half of 2016 the Dominican economy grew 7.4% continuing its trend of rapid economic growth. Recent growth has been driven by construction, manufacturing, tourism, and mining. The country is the site of the second largest gold mine in the world, the Pueblo Viejo mine.

The Dominican Republic is the most visited destination in the Caribbean. A geographically diverse nation, the Dominican Republic is home to both the Caribbean’s tallest mountain peak, Pico Duarte, and the Caribbean’s largest lake and point of lowest elevation, Lake Enriquillo. The island has an average temperature of 26 °C (78.8 °F) and great climatic and biological diversity. The country is also the site of the first cathedral, castle, monastery, and fortress built in the Americas, located in Santo Domingo’s Colonial Zone, a World Heritage Site. Music and sport are of great importance in the Dominican culture, with Merengue and Bachata as the national dance and music, and baseball as the favorite sport.

Here’s the latest World Bank data for Puerto Rico – with the year 2000 as a comparison.

Finally, here’s the data from Greatest Sporting Nation on how the Dominican Republic performed in the global sporting arena in 2016: