Rachel Jones is a Djibouti based runner – and a writer about running. Her articles can be found, inter alia, on Runners World.

Denise ‘da bees knees’ came across Rachel during her Djibouti research, tracked her down, and asked if she’d very kindly agree to help with Run the World Djibouti. She would. Hooray!

Rachel is married to Tom Jones. Not the hip gyrating Welsh singer of ‘Delilah’** and ‘The Voice’ fame. Rather the founder, and now Director, of the International School of Djibouti (ISD.

So when Rachel met me off the 15 hour journey from London she whisked me, bleary eyed but hopefully vaguely coherent, straight off to the ISD. Where it was my pleasure to talk to 39 students and staff.

Regular readers will know that the students I talk to rarely fail to come up with new questions – and the ISD audience was no exception. “Do you have any pets?” and “How many houses have you borrowed [while travelling around the world]?” being two of my favourites.

Pictured above, they were a delightful set of students – a credit to ISD.

A couple of hours of downtime at my hotel followed before Tom drove Rachel and myself to Balbala Stadium. The stadium is in a deprived and socially conservative part of town.

Around Balbala Stadium, a deprived and socially conservative part of Djibouti. (I had a stone thrown at me when running nearby.) Full story at dansgoldchallenge.wordpress.com

But every week, 20-30 local girls make their way to the stadium, divest themselves of their hijabs and prepare to run. 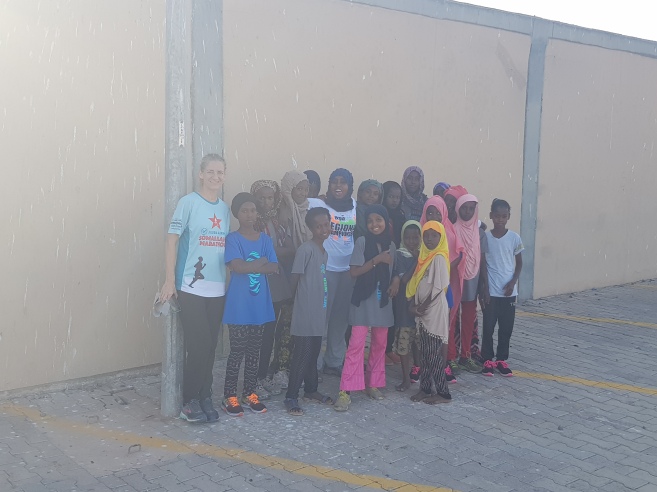 They’re all members of  Girls Run 2, a running club for girls set up by Rachel, and trained by coach Nasra. On the afternoon I was there, Nasra set them to do laps followed by a stretching session and a knock about game of football. (Between training sessions, Nasra acts as something of a life coach helping the girls to get into, and then stay at, school.)

A bit before 6pm, a number of other runners arrived including UN employees and a contingent from the Royal Marines. After a quick welcome speech we all ran a lap of the stadium together with the girls and then headed off back into town for our 10 km.

Shortly after we left the stadium a stone hit my calf. At the time I didn’t think much about it as I was deep in conversation with Andrew about Socotra, a Yemeni island that might be the answer to my ‘where can I run safely in Yemen’ conundrum. At the end of the run Rachel told me that, not the first time, she’d also had stones thrown at her and one of them had hit her in the face.

But I wouldn’t want that to detract from the memory of an excellent run on a lovely evening.  And I’m pleased to report that amongst those who completed the 10 km

and two of the Girls Run 2 club members – which was pretty impressive at their age. 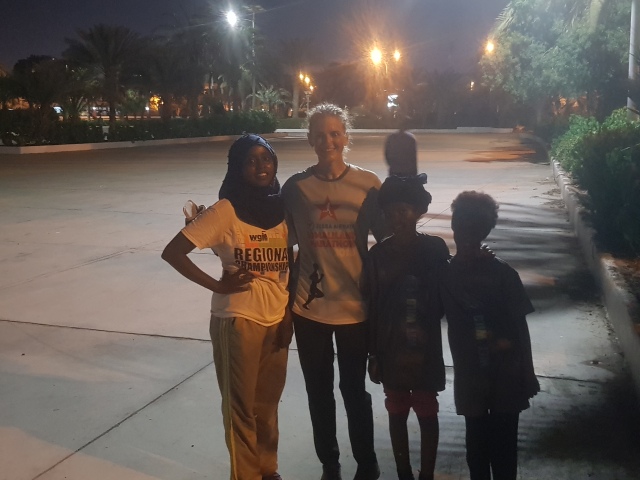 It just remains for me to say a huge thank you to Rachel, Tom, the staff and students at the ISD, Nasra, the Girls Run 2 club, Andrew, Beca and all my fellow runners for the hospitality, company and donations. I thoroughly enjoyed my time in Djibouti and, if anyone can make it, then it would be great to see you in London on July 4th 2020 for the UK and final leg of Run the World!

*For some reason I failed to record the first 5km of the run on my Garmin…but, as you can see from the photo 3 above, we actually ran 10.6 km (6.6miles)

**He had plenty of hits but ‘Delilah’ was adopted by the fans of the mighty Stoke City so it’s my favourite.

Djibouti is a country located in the Horn of Africa. It is bordered by Eritrea in the north, Ethiopia in the west and south, and Somalia in the southeast. The remainder of the border is formed by the Red Sea and the Gulf of Aden at the east. Djibouti occupies a total area of 23,200 km2 (8,958 sq mi).

In antiquity, the territory was part of the Land of Punt and then the Kingdom of Aksum. Nearby Zeila (now in Somalia) was the seat of the medieval Adal and Ifat Sultanates. In the late 19th century, the colony of French Somaliland was established following treaties signed by the ruling Somali and Afar sultans with the French and its railroad to Dire Dawa (and later Addis Ababa) allowed it to quickly supersede Zeila as the port for southern Ethiopia and the Ogaden. It was subsequently renamed to the French Territory of the Afars and the Issas in 1967. A decade later, the Djiboutian people voted for independence. This officially marked the establishment of the Republic of Djibouti, named after its capital city. Djibouti joined the United Nations the same year, on 20 September 1977. In the early 1990s, tensions over government representation led to armed conflict, which ended in a power-sharing agreement in 2000 between the ruling party and the opposition.[

Djibouti is a multi-ethnic nation with a population of over 942,333 inhabitants. Somali, Arabic and French are the country’s three official languages. About 94% of residents adhere to Islam, which is the official religion and has been predominant in the region for more than a thousand years. The Somali (Issa clan) and Afar make up the two largest ethnic groups. Both speak Afroasiatic languages.[

Djibouti is strategically located near some of the world’s busiest shipping lanes, controlling access to the Red Sea and Indian Ocean. It serves as a key refuelling and transshipment center, and is the principal maritime port for imports from and exports to neighboring Ethiopia. A burgeoning commercial hub, the nation is the site of various foreign military bases, including Camp Lemonnier. The Intergovernmental Authority on Development (IGAD) regional body also has its headquarters in Djibouti City.

Here’s the latest World Bank data for Djibouti – with the year 2000 as a comparison.

Finally, here’s the data from Greatest Sporting Nation on how Djibouti performed in the global sporting arena in 2018: