The British Embassy team in Libreville thought there might be areas of mutual interest between the Foundation and Run the World – particularly cancer awareness and healthy living education –  and was good enough to contact the Foundation.

Thanks to their introduction, I was invited to give two talks at the Ruban Vert School in Libreville

one to the senior school 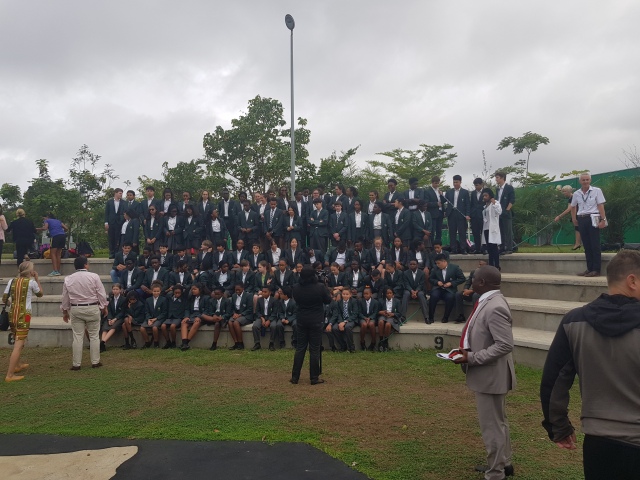 and one to the junior school (at the top of the blog). School talks are normally great fun and these were no exception. 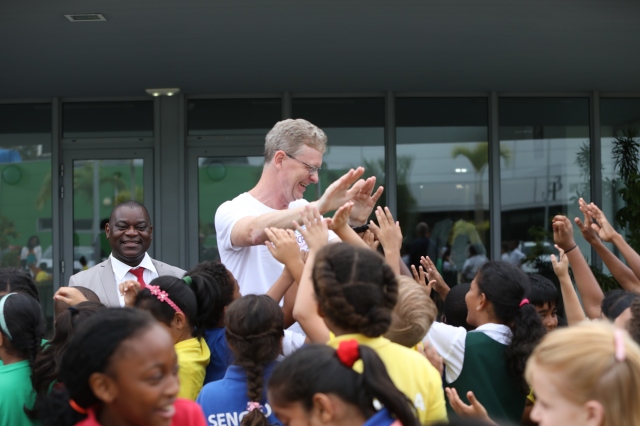 The junior school had so many questions that the session could have gone on all day.

Which would have been fine by me except that we were due at the Maison d’Alice (another project supported by the Foundation) at 12.30 and we had a lot to do before then.

Firstly, we were off to the Marathon du Gabon who’d organised a route and a trainer to run with me.

From their offices we made our way to the seafront and got ready to run. By now it was 10.30.

Those who know me well may snigger in disbelief when they read this, but I greatly dislike being late. And, even with my rudimentary knowledge of Libreville’s geography, I knew we were going to be pushed to complete the run, get back to the hotel, shower and pack, and then get to the Maison d’Alice by 12.30

So I decided that, to give ourselves the best chance of sticking to the schedule, I’d try to complete the 10km in a decent time. That’s a decent time by my standards rather than my trainer’s standard. He’s a 33 minute man ; I am not.

We set off at a reasonable pace along the coastal road (bord de la mer) – which is ideal for running (though I’d advise running early in the morning or in the evening rather than midday-ish..).

For readers not familiar with Libreville, a little north of where we were running it also has a great beach.

Back to the run. After about 500m I saw a road sign on my left. To avoid it, I started to swerve right when I realised that my running companion was riding shotgun, a very close shotgun. And that, if I went into to him, he might end up in the road.

A hasty last minute adjustment meant that my left hand caught the road sign. Cue some gouged flesh and three rivulets of blood.

Far more importantly, I’d knocked my Garmin. My Garmin records my runs and is, I guess, the only real proof that I’ve done them. So it has to show that I’ve run 10km. Meaning that we had to start again….

I won’t bore you with the details of the rest of the run but suffice it to say that this was the first of a series of mishaps that, combined with the heat and humidity, meant that it was both a painful run – and a slow one.

And the worst bit about it? My efforts underneath the hot sun were a complete waste of time. The traffic was so bad that I’d have had to set a new world record for us to make the Maison d’Alice on time.

Late though we were (for which many apologies), Jessye and the team at Maison d’Alice

looked after us extremely well and showed us round with justifiable pride. It’s a beautiful facility for cancer sufferers and their families to stay, relax and give themselves the best chance of fighting cancer.

At the end of the visit, there were a few cameras and a few questions.

Aided by the ever helpful Patrick who was translating (and fine-tuning) my answers, I was honestly able to say how much I’d enjoyed my time in Gabon and how impressed I was by the Maison d’Alice.

It just remains for me to say a huge thank you to the Sylvia Bongo Ondimba Foundation, to Richard Welford and the staff and students at the Ruban Vert School, to Sebastien and Philippe and the Marathon du Gabon, to Jessye and everyone at the Maison d’Alice and to Ambassador Laxton, Marante, Fiacre and Patrick at the British Embassy.

I hope to see you all in London one day, ideally on July 4th 2020 for the UK (and final) leg of Run the World!

Gabon is a country on the west coast of Central Africa. Located on the equator, Gabon is bordered by Equatorial Guinea to the northwest, Cameroon to the north, the Republic of the Congo on the east and south, and the Gulf of Guinea to the west. It has an area of nearly 270,000 square kilometres (100,000 sq mi) and its population is estimated at 2 million people. Its capital and largest city is Libreville.

Since its independence from France in 1960, the sovereign state of Gabon has had three presidents. In the early 1990s, Gabon introduced a multi-party system and a new democratic constitution that allowed for a more transparent electoral process and reformed many governmental institutions.

Abundant petroleum and foreign private investment have helped make Gabon one of the most prosperous countries in Sub-Saharan Africa, with the 4th highest HDI[4] and the fourth highest GDP per capita (PPP) (after Mauritius, Equatorial Guinea and Seychelles) in the region. GDP grew by more than 6% per year from 2010 to 2012. However, because of inequality in income distribution, a significant proportion of the population remains poor.

Here’s the latest World Bank data for Gabon – with the year 2000 as a comparison.

Finally, here’s the data from Greatest Sporting Nation on how Gabon performed in the global sporting arena in 2017: